Zweilous is a quadrupedal two-headed draconian Pokémon. Two black wing-like appendages and a second head have appeared on its body upon evolving from Deino. Black scruffy fur covers both heads' necks and eyes. It has two claws on each front leg, as well as a stubby tail and two feather-like "horns" on both of its heads. Its round, plumper underbelly has two rows of magenta scales. Zweilous' belly is rounder and wider due to the fact that it is a voracious Pokémon that is constantly eating; its heads compete for food, so it eats more than necessary.

Zweilous' two heads do not get along and will often fight and compete with one another. They are especially competitive over food, so Zweilous will often eat too much because each head wants to eat more than the other. Whichever of Zweilous' heads eats more becomes the dominant head.

Zweilous is the evolved form of Deino as of level 50, and evolves into Hydreigon at level 64.

Two Zweilous made their debut in A Village Homecoming!, where one of them went on to evolve into a Hydreigon.

Zweilous is based on a two-headed dragon. The fact that it grows more heads upon evolving may make it based on the Hydra or Yamata no Orochi from Greek and Japanese mythology, respectively. It could also be based on cave salamander, because, due to living in caves, are considered blind. The black fur surrounding its heads resembles a hoodie, associated with some goth or emo trends, with its bangs resembling an emo fringe. It may also be based on polycephaly, an occurrence that causes an organism to be born with two heads.

Zweilous possibly comes from zwei (German for "two", referencing Zweilous' number of heads and its number on the evolution line) and jealous or zealous (due to their attitude and how the two heads often fight). It may also include zwilling (German for "twin", since Zweilous has two identical heads).

Jiheaddo comes from di (Greek prefix for "two", which is generally thought to be similar for ji(二), Japanese for "two") and "head". 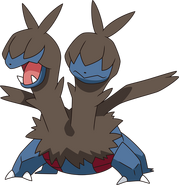 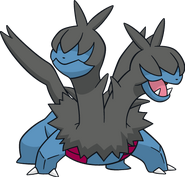 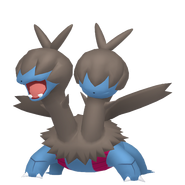 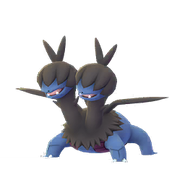