It has a Normal/Ghost-type Hisuian form introduced in Generation VIII.

Zorua is a small quadrupedal Pokémon that resembles a fox cub. It has large triangular ears and a short snout with a tiny black nose, and furry whisker-like tufts of fur that protrude from either side of its face. Zorua's eyes are sky blue colored with red eyelids, and it also has circular red patches above its eyes resembling eyebrows. Zorua's body is covered mainly in slate-gray fur. It has a deep gray fluffy mane around its neck, and a tuft of red-tipped fur atop its head that resembles a flame. It has small red-tipped paws and feet with no visible digits, and a short fluffy gray tail.

Zorua's Hisuian form is covered in fluffy grayish white fur with red tints, that transition to a faded reddish-pink color, on the tips of its tail, neck fur and head tuft; the fur atop its head and around its neck is much larger and longer than that of its Unovan counterpart, and, along with its tail, features long strands trailing above and behind its head. It has round, yellow eyes with pink eyelids and round red eyebrows. Its ears feature faded reddish-pink tips, with dark gray insides, and the tips of its paws are dark gray in coloration. Hisuian Zorua are often confused with either Vulpix or Growlithe by those whom have never encountered one before.

Zorua are known to be mischievous but timid Pokémon. They are tricksters, possessing the ability to change into the forms of others to surprise and confuse them or to playing tricks for fun. They are able to transform into other Pokémon, as well as humans. When transforming into a human, Zorua usually takes the form of a silent child, though some have a preference for a human form. Luke's Zorua is an example, as she seems to like being in a female human form rather than a male human form. Zorua often have an impish grin on their faces while giggling. They have been known to occasionally replace normally talkative children.

Zorua usually reside in lush forest or rugged mountains with their Zoroark parents. Sometimes Zorua can found in cities either with trainers, some disguised as Humans or Pokémon.

Hisuian Zorua are the result of Zorua migrating from other regions, where they were shunned by humans that despised them for manifesting uncanny illusions, but later perished due to being unable to survive within the harsher environment of Hisui and the strife with other Pokémon; their lingering souls were reborn as Ghost-types from the power of their hatred and malice towards humans and Pokémon. Through their ghostly mimicries, they can draw strength from people and Pokémon's terror alike. Additionally, unlike their Unovan counterparts, Hisuan Zorua have a more sad melancholic expression rather than an impish grin. Nonetheless, they can be invaluable allies when they choose to be tamed by humans.

Zorua can create incredible, realistic illusions. It is able to transform into both people and Pokémon in order to confuse them. Nonetheless, sometimes its illusion can still get exposed because of its uncovered tail, and if the tail is touched, it will revert to its true form.

Hisuian Zorua can create ghostly mimicries through the spiteful powers emitted from their long fur on their heads, around their necks and on their tails. They can also subsequently absorb terror from their victims as the source of their power.

Zorua evolves into Zoroark at level 30.

Zorua is based on the kitsune of Japanese folklore, a mystical shapeshifting fox. It's facial markings are reminiscent of both kabuki and noh makeup. It may also play off of how foxes in media are often depicted as deceptive or are tricksters.

Zorua's habit of replacing talkative children with itself is similar to Irish folklore about the Changeling, a fairy-child that replaces human children kidnapped by fairies, Putting a Changeling over a fire would cause it to jump up the chimney and return the human child. As a result, baby boys often wore dresses to make them look like girls to confuse the fairies.

Hisuian Zorua has closer ties with the kitsune in terms of physical appearance and coloration of red and white. Its origin, which involves it reborn from its lingering soul, is analogous to vengeful ghouls and ghosts, as well as revenants. Its personality of being invaluable allies when someone earns their trust is also based on a benevolent Kumiho, Huli Jing, and Kitsune assisting humans. Its coloration may be based on kitsune masks. 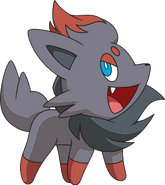 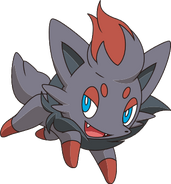 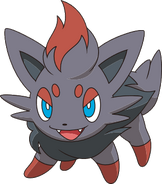 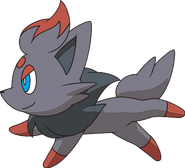 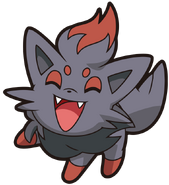 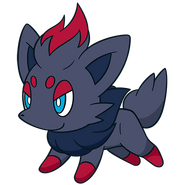 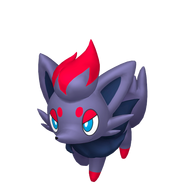 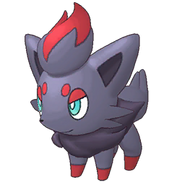 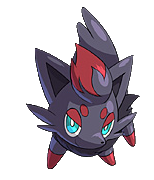 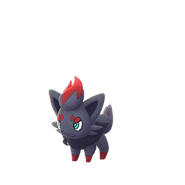 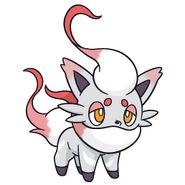 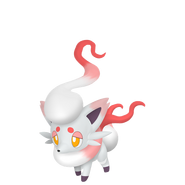