Zoroark is a fox like Pokémon covered mainly in dark grayish fur. It has a pointed muzzle, red lining around its eyes and mouth, teal eyes, a fluffy black ruff of fur around its neck, and a long, voluminous spiky crimson mane with grey tips. A teal-colored band encircles the bottom part of Zoroark's mane like a ponytail. It has three sharp red claws on both its hands and feet.

Zoroark's Hisuian form consists of light grey fur on its body, a white mane with red tips resembling tendrils, red spots on its arms and legs and deep navy blue claws. Its eyes are yellow with red markings on the edge and deep blue inside of its ears. The red tips and spots on its body are results of laceration caused by their intense hatred and malice for humans and other Pokémon.

Zoroark are mysterious and sometimes mischievous Pokémon, although they are generally more serious than their pre-evolution Zorua. They are very protective of their homes and their family. They will use illusions to trick enemies and prevent them from entering their lair. They are extremely protective of those it cares about and will go to any lengths to keep them safe, including risking their own lives, and one can hold grudges on those who harm its loved ones. Zoroark will hide their Zorua young in their manes to protect them and carry them around.

There are stories that say Zoroark punishes those who attempt to catch it by trapping them in an illusion. Some domesticated Zoroark, nonetheless, may instead perform their illusions to ease their lonely trainers' solitude.

Hisuian Zoroark are notably more maliciously and ferociously aggressive than regular Zoroark. They are reckless and tend to assail their victims with their incredibly terrifying illusory projections that can terrify them from the inside out. However, they still display a compassionate streak to their loved ones, notably their Zorua children. Additionally, they can prove themselves to be invaluable allies once they establish trust with humans and other Pokémon.

A Unovan Zoroark can morph or reincarnate into a Hisuian Zoroark, either through perishing in the harsh strifes in the wild after being casted away, or losing their beloved Zorua child and subsequently overwhelmed by intense malice and emotional pain.

Zoroark can create incredibly realistic illusions. However, Zoroark are incapable of physically changing themselves into another form; they are merely capable of casting illusions. They can transform into both people and other Pokémon. When a Zoroark takes the form of a human, it is capable of human speech. They use their illusory powers to protect their lair and their pack. They have the ability to fool a large group of people simultaneously and cameras with their illusion-generating powers.

Zoroark can easily stand on 2 legs, but when they need to run, they resort to all fours.

In the Sun and Moon series, Zoroark can also use its illusionary powers show memories of the past.

Hisuian Zoroark can project illusions from the spiteful power they emit from their long writhing fur, which can inflict both severe physical and psychological harm on their foes, damaging their victims' bodies from both inside and out as well as driving them mad by the terror. Hisuian Zoroark can also make their illusion of humans talking, to the point of easily fooling anyone in order to get food.

Zoroark is the evolved form of Zorua as of level 30.

A female Zoroark appears the Pokémon movie Zoroark: Master of Illusions. In the movie, Zorua called Zoroark "Meema" (Pronounced Mee-Mah) throughout. "Meema" was Zorua's way of calling Zoroark his mom.

Zoroark is most likely based on the kitsune of Japanese folklore, a mystical shapeshifting fox. However, Zoroark and its pre-evolution are based on the darker and more mischievous sides of kitsune, most likely the "yako" and "nogitsune" variations. Its facial markings are reminiscent of both kabuki and noh makeup. It may also play off of how foxes in media are often depicted as deceptive or are tricksters. There is also a possibility that Zoroark is based on the chupacabra, a mythical creature from South America and Mexico, said to kill and drain the blood of livestock. Key features of the chupacabra consist of sharp fangs, an upright stance and sharp spines along its back, similar to Zoroark.

It also resembles a werewolf, due to the fact that it is an anthropomorphic canid, like most werewolves.

Its Hisuian form seems to have a stronger tie to its Kitsune origins with the coloration of red, white and ghost typing. The Baneful Fox mask may take inspiration and coloration from Kitsune masks. Its origin, which involves it reborn from its lingering soul, is analogous to vengeful ghouls and ghosts, as well as revenants. It's personality of being invaluable allies is also based on a benevolent Kumiho, Huli Jing, and Kitsune assisting humans. The red portions on its arms and legs resemble frostbite sores.

Zoroark comes from zorro (Spanish for "fox") and dark. 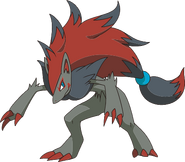 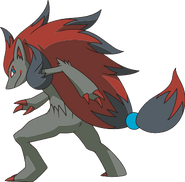 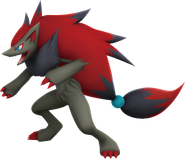 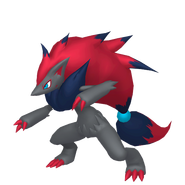 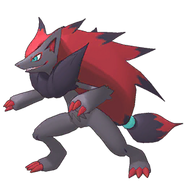 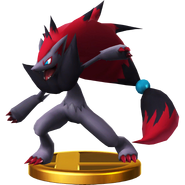 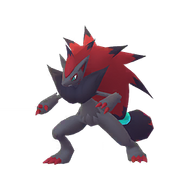 Zoroark in battle in Generation V. 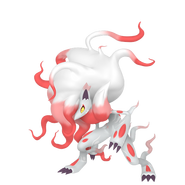