Zarude is a black simian Pokémon with looks resembling a mandrill or baboon. Its head is shaped like an X, and its eyes are red with green irises and black pupils. It has a gray face pattern and a jutting out jaw with two visible nostrils and a furry beard. Its teeth are extremely sharp, with 2 on its upper jaw hanging downwards and sticking out.

Zarude has a lean build with 2 black tufts off the hair on each shoulder. Each arm is Long with a green vine wrapped around it resembling a spring. It's legs can also be wrapped around by the same vines likes it's arms along with its body such as it's face, waist, and shoulders which is the same color as its neckwear depending on a troop member of its tribe as for the elder, the vines are sickly green. Each of its hands is visibly humanoid, with black claws for fingers. Its body has a rib cage pattern and its feet have four simian toes and one claw at the back. It has a short tail with a star-shaped end like Litten.

Zarude often live in large groups and will show hostility to any other species of Pokémon and Humans that aren't members of its pack, However, Zarude occasionally exhibit a softer side. It is able to manipulate vines from its body as a means of moving amongst the high trees and gathering berries from hard-to-reach areas. It is believed that the vines from Zarude, Once they tear off the vines become nutrients in the soil for plants of the forests it lives in grow.

During a fight, Zarude relies on its swift acrobatic movements and attack opponents with its claws. It is quick witted and has little to no effort in winning many battles.

Zarude tribes follow their own law that allows no outsiders including Humans to be a part of their tribes and protect the scared healing springs of the Heart Tree and Zarude can speak the human language.

A caped Zarude named 'Dada' split from its pack to raise and nurture an orphaned human infant. It's said that this Zarude derived unique strength from its bond to the adopted human child.

Zarude, being a Mythical Pokémon, does not evolve.

Zarude mostly takes traits of various monkeys such as mandrills and baboons, it seems to resemble a black lemur the closest. Male black lemurs are one of the only primates that sport a stark black coloration, with some individuals having slight grey accents on the face. The male coloration is further accented by the fact that all known Zarude are male despite being genderless. However, the orange belly on shiny Zarude could be a reference to the fact that female black lemurs have orange features.

It may get its Dark typing may be a reference to the aggressive nature of black lemurs, or to the nature of other aggressive primates such as mandrills and baboons. It's long fingers may also be based on an Aye-aye, a nocturnal lemur that lives in Madagascar that was killed as it was thought to be evil due to sneaking into sakalava people's homes though thatched roof and killing them in their sleep using their thin middle finger to puncture their victims' aorta, while its Grass typing is from how monkeys often live in jungle areas that contain vines and It also possesses traits of spider monkeys with how they use vines to grapple enemies and trees, where spider monkeys use their prehensile tails.

The use of leaves, vines and other plant items as "clothing" draws comparisons to Passimian, the only other known lemur-based Pokémon. Both Pokémon are very similar in size and social structure, including both cooperation-focused societies and groups with roles/hierarchies.

Outside of zoology, It could also have been based on the Shug Monkey from Cambridgeshire folklore, the Shug Monkey is a creature that shares features of a dog and monkey, which reportedly haunted Slough Hill Lane (a street that leads from the village of West Wratting to nearby Balsham), The creature, believed to have the body of a jet-black shaggy sheepdog and the face of a monkey with staring eyes, was believed to be a supernatural ghost or demon, and the "Carew Ape", a Ghost of Sir Roland's pet Barbary Macaque: Satan who is said to haunt the Carew castle in Wales, It can be seen prowling the battlements and howling on dark stormy nights.

Zarude comes from saru (monkey) and "rude". The "za" in its name might have also been derived from Zacian and Zamazenta, the two box legendaries of Pokémon Sword and Shield. 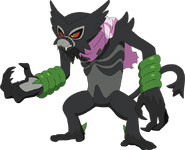 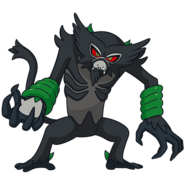 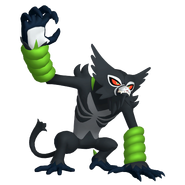 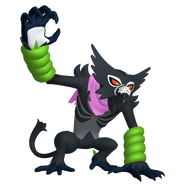 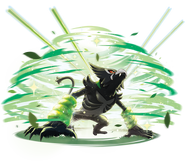 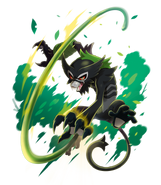