Zamazenta (ザマゼンタ, Zamazenta) is a Fighting-type Legendary Pokémon introduced in Generation VIII. It is the mascot for Pokémon Shield.

When it is holding a Rusted Shield in battle it turns into its Crowned Shield form, which is a Fighting/Steel type.

Zamazenta resembles a quadrupedal red fur-colored wolf-like creature with a large shield-like mane and dark blue fur sticking out from the bottom of the mane, sticking upward on the frontal paws and pointing up on the head as a high ponytail. Zamazenta's body has several scars and scratches and its right ear is half cut-off.

In its Crowned Shield form, its mane turns into a huge, gold shield with red highlights, as well as crown-like texture on its head that covers the half cut-off ear. Its ponytail and tail are neater now. It also has many scars and shaggy fur.

Zamazenta, similar to Zacian, can absorb metal to assume its crowned form. Its shield can slide into a different alignment when defending or using Behemoth Bash, which is described as strong enough to crack the land and the resulting shockwaves can defeat multiple enemies simultaneously, as well as being able to go through mountains. Its shield can deflect most attacks, even Dragon Claw cant dent it.

Zamazenta, alongside Zacian only made brief appearances in certain recent opening scene of Pokémon (2019), and has yet to debut in some episode they will appear. It played a major role in the Darkest Day arc.

It is based on a wolf. The shield embedded on its body may act as a reference to Pridwen from the Arthurian legends of Celtic Mythology. Its armor may draw inspiration from medieval knights. Zacian and Zamazenta are also likely based on the wolves Skoll and Hati from Norse Mythology.

The return of the legendary duo in the present day is similar to how many beloved King Arthur would be reincarnated into a savior figure.

Furthermore, the fact that the duo's weapons are described to be extremely strong offensively and defensively, creates an irresistible force paradox, popularized by a Chinese story about a man selling a spear and shield with abilities similar to the weapons wielded by the duo, only to be asked what would happened if they are used against each other.

Zamazenta may originate from "magenta", a pinkish-red color. This could refer to the red color of Pokémon Shield or its Shiny coloration, in which it is magenta. 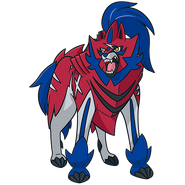 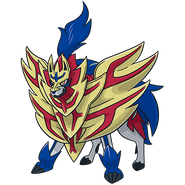 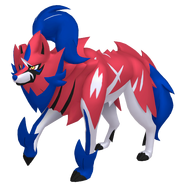 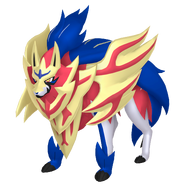 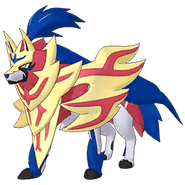 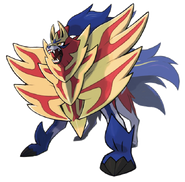 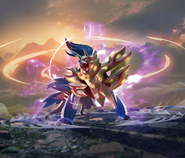 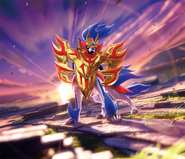