Undiscovered
Zacian (ザシアン Zashian) is a Fairy-type Legendary Pokémon introduced in Generation VIII. It is the mascot for Pokémon Sword. When it turns into its Crowned Sword form, it is a Fairy/Steel-type.

In its Crowned Sword form, Zacian wears a gold armor with wing-esque plates on its front legs, smaller plates on its hind legs, and a crown like helmet which covers up the broken ear, the coral red fur bangs become thicker and more slender, and the azure fur is cleaner. In this form Zacian carries a golden sword with azure and coral red colored gems on its mouth.

Zacian (Zamazenta If playing Shield) is first found in the Slumbering Weald at the beginning at the game. You and your rival Hop take it on, but the moves seemingly get lost in fog and have no effect. You also see it in the Post-Game in Wyndon on the top of the tower after defeating Sordward.

It is based on a wolf. The sword in its mouth may be a reference to Excalibur from the Arthurian legends of Celtic Mythology. It may also take inspiration from the Lady of the Lake from the same tale.

Its braid-like fur is in a similar fashion to Celtic braids. In its Crowned Sword form, its ribbons, head ornament and wing appendages are likely borrowed concepts from a Valkyrja (a Nordic goddess), namely Brynhild. Zacian and Zamazenta are also likely based on the wolves Skoll and Hati from Norse Mythology.

Zacian may originate from Cyan. 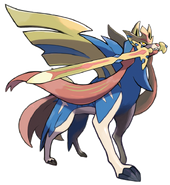 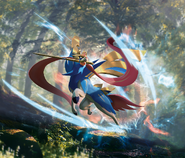 Add a photo to this gallery
← Dragapult | Zacian | Zamazenta →
Retrieved from "https://pokemon.fandom.com/wiki/Zacian?oldid=1190510"
Community content is available under CC-BY-SA unless otherwise noted.