Can't be sold
The Z-Ring is an item introduced in Generation VII. Alongside a Z-Crystal, it can trigger a Z-Move.

The Z-Ring is technically a white Mega Ring but instead of holding a Key Stone, it holds a Z-Crystal.

The basic setup of a Z-Ring 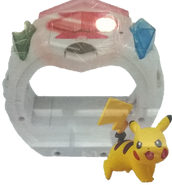 Front
Add a photo to this gallery
Retrieved from "https://pokemon.fandom.com/wiki/Z-Ring?oldid=1344921"
Community content is available under CC-BY-SA unless otherwise noted.