Yveltal appears to be a very destructive and single-minded Pokémon, which is logic, due to its status as the Legendary Pokémon of Destruction and being the opposite of Xerneas. Its single-minded and highly wild nature was shown when Dace recalled flashbacks about what has happened to the Forest and after it woke up with a furious frenzy, destroying the whole forest just to seek out the ones who have awaken it during its slumber. However, in contrast to its seemingly 'death bringer' personality, it is not always openly destructive, as it left in peace when it was calmed down by Xerneas and its Fairy Aura, but not before restoring the lake and then, flying away.

Yveltal appeared in Diancie and the Cocoon of Destruction as a being of destrucion where it destroyed the whole forest following the laws of nature. Later it went on deep slumber. When thieves were fighting over for Diancie in an underground pool where Yveltal slept it caused, Yveltal woke up in its cocoon form and started to destroy the whole forest again in anger. Diancie tried to stop it but couldn't until she remembered what Xerneas had said and vowing to never give up caused Diancie to mega evolve into Mega Diancie to create large diamond and blocked Yveltal's power. Later the thieves Argus Steel and Millis Steel used their airship to fire missiles on Yveltal, but Yveltal avoided them so easily. It flew towards the thieves airship, grabbed it, and turned them into stone. Xerneas reappeared and battling it, and then Xerneas uses its Fairy Aura to calm Yveltal down halting its rampage. After that Yveltal went away flying peacefully. 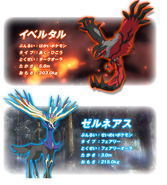 Add a photo to this gallery
Retrieved from "https://pokemon.fandom.com/wiki/Yveltal_(MS017)?oldid=1353767"
Community content is available under CC-BY-SA unless otherwise noted.