Yungoos is a long-bodied mongoose-like Pokémon with yellow stripes on its brown coat, a patch of fur on its head resembling a toupee, and a mouth filled with large pointed teeth.

Because of its long body, a Yungoos always gets hungry and they eat without manners. They roam around all day searching for prey (Rattata in particular) but at nightfall quickly lose all stamina and fall asleep.

To hunt, Yungoos stake out a particular route and then patrol it back and forth for prey. They do not stray from their paths, which they try to set in areas safe from larger predators. They strongly prefer live prey and will only scavenge as an absolute last resort.

A diurnal creature, Yungoos was introduced to Alola to deal with the invasive Rattata. However, as they hunted during the day the Rattata became nocturnal to avoid the new daytime predator.

Being a normal-type Pokémon, they possess no special abilities. However, they tends to bite with their sharp teeth that can crush bone with little effort.

They also possess strong stomachs with powerful digestive acids that make quick work of any meal.

Yungoos is based on a Javan mongoose, a species of mongoose imported to Hawaii to stop rats from eating sugar cane crops, similarly to how Yungoos were introduced to the Alola region to control Alolan Rattata and Alolan Raticate.

Yungoos and its Japanese name, Yanguusu, come from young and mongoose. 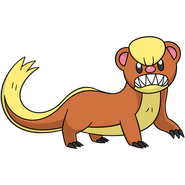 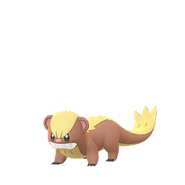