Yellow Chapter is the second Chapter of Pokémon Adventures manga. It is based on the game, Yellow. It is consisted of four volumes.

Continuing from Red, Green & Blue Chapter, Red, after receiving an invitation to a special battle, went missing. All known about it is that Pika came back to Prof. Oak's lab, heavily damaged. To find Red, a boy with a large straw hat appears, takes Pika and off to find Red's whereabouts. However, the boy and Pikachu are targeted by the Elite Four, a group of four powerful trainers. To seek help, Yellow turns to the remaining Gym Leaders, as well as Red's rival, Blue, who faced one of the Elite Four before.

The volume contains 12 chapters, from "Ponyta Tale" to "Growing Out of Gengar". Yellow goes from Celadon City to Cinnabar Island. 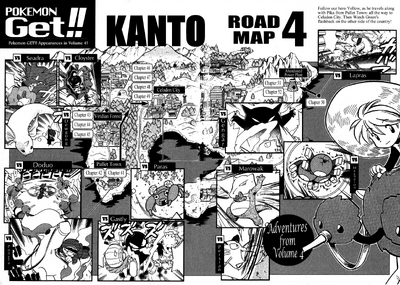 Receiving an Omanyte and a Graveler, as well as catching a Caterpie and accidentally letting Rattata evolve, Yellow trains with Blue. While Yellow seeks more help, Green turns to Bill, but both are attacked by a Hitmonlee. Yellow faces an Elite Four member, Lance, and seemingly defeats him, then goes to Cinnabar Island to meet Blaine. Learning the location of Elite Four's headquarters, Yellow splits up with Blaine, who joins up with Blue and both find out the missing Gym Leaders. 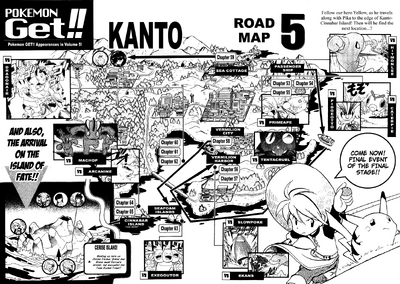 Yellow senses Pika's dream, finding out Red was overpowered by three Elite Four members. Going with Green and Bill, they also reach Cerise Island and split up using the Spoons of Destiny. Koga and Blue fight Agatha, Green and Sabrina go after Lorelei, Yellow and Blaine team up against Lance, leaving Lt. Surge with Bill. In the middle of these exhausting battles, Red appears to take on Bruno, while Blaine and Yellow are swept away, revealing Yellow's greatest secret.

The volume contains thirteen chapters, from "Punching Poliwrath" to "Victim of Venusaur". Yellow goes from Cinnabar Island to Cerise Island. 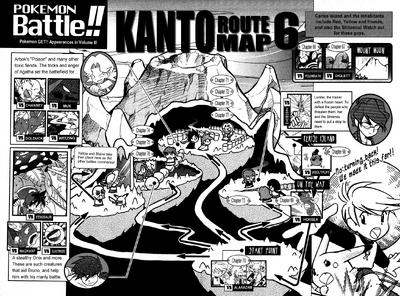 As the battles conclude towards their end, Blaine gets badly injured. Yellow takes his Mewtwo and sides up with an unexpected alliance: Giovanni. Lance manages to trick all of them, using the Gym Badges to summon a great beast to finally create a Pokémon Utopia, banishing all other humans. To fight against him, Yellow's Pokémon evolve and take him on. Yellow realizes the key to defeating Lance and, powered by Red, Green and Blue, defeats Lance.

The volume contains thirteen chapters, from "Airing Out Aerodactyl" to "The Legend". Yellow goes from the bottom to the top of the Cerise Island. This is also the final volume of Yellow Chapter and the story continues in Gold & Silver Chapter. 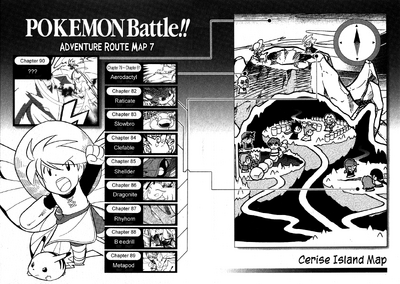