Yamper (ワンパチ, Wanpachi) is an Electric-type Pokémon introduced in Generation VIII. It evolves into Boltund at level 25.

Yamper is based on the Corgi, a breed commonly attributed to the UK (Welsh Corgis, the royal Corgis). It shares the chubby body and short legs with the Corgi, but its face more resembles the Boston Terrier. Its underbelly and paws are white, while its top half is light tan. It has a small, lightning-bolt shaped tail. The insides of its ears are green and yellow, as are its eyes. It has a large patch of yellow fur around its neck. It has two small, visible fangs on the bottom of its mouth.

Yamper have a habit of chasing running and moving things, ranging from humans and other Pokémon to moving vehicles.

As they can't store much electricity in its organ, this can explain their tendency to roam around with crackling electric sparks.

Yamper follow and obey people only because they want treats, according to their Shield Dex entry. However, this doesn't affect their popularity in Galar as shepherd dogs.

Yamper can generate electricity from the base of their tails.

A Yamper appear in the anime where it belongs to Professor Cerise and his family but has a special attachment towards Chloe. Yamper first appeared in "Legend? Go! Friends? Go!" Where Ash and his Pikachu arrives at the Cerise Laboratory.

Yamper is based on a Pembroke Welsh Corgi puppy. It may also be based on either the Raiju, a mythical lightning beast in Japanese mythology, which is known to take the shape of a wolf or dog. It may take some inspiration from the black dog, an English myth that is known to be seen during thunderstorms.

Yamper might come from yap, a dog noise, scamper, to run around, and ampere, a measurement of electricity. 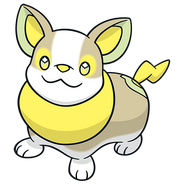 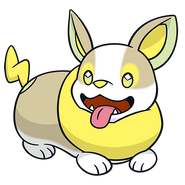 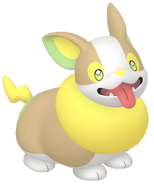 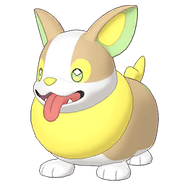 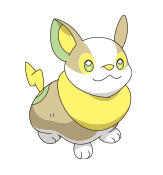