A Xtransceiver (ライブキャスター Live Caster) is a Key Item that first appeared in the Generation V games. The Xtransceiver allows the player to communicate with NPCs and other real life characters through the C-Gear.

The Xtransceiver has been used many times through out the game. Mostly it is Professor Juniper, Cheren, Bianca and the player's mom who will call. The screen fits up to four people that consists of the caller, and the person or people called. It can call at least 2 minimum people and at a maximum of four.

In Black 2 and White 2, there is a dropped Xtransceiver near the entrance of the Nimbasa City amusement park. It belongs to a woman named Yancy, if your the male character, Nate, or if your character is the girl, Rosa, it belongs to a man called Curtis. They call you periodically and comment on your preferences.

Even though it is spelled "Xtransceiver", it is pronounced "Cross-transceiver".

Blue and Red Xtransceivers in Black and White. 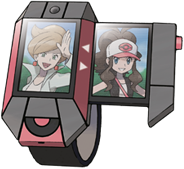 An Xtransceiver illustrated in the Pokémon Adventures Manga in the "Black and White" Chapter.

Female Version.
Add a photo to this gallery
Retrieved from "https://pokemon.fandom.com/wiki/Xtransceiver?oldid=1278341"
Community content is available under CC-BY-SA unless otherwise noted.