Prior to "X&Y034: Pinsir Glares" (location: Kalos Route 18)
This Xerneas, nicknamed Xerxer, is a fairy-type Pokémon formerly owned by Y.

Xerxer is a wise Pokémon who knows the best strategies in battling. Xerxer telepathically communicates with Y and offers her advice. Xerxer seems to have a hatred of its rival Yveltal, and is first shown battling it. It is wary of Zygarde, as it is neither a friend or foe. Xerxer is also friends with AZ and communicates with him.

Xerxer is affectionate and caring towards humans as well. It encouraged X, who was stuck in his sadness, to make him feel better. When facing crises, it joined forces with humans to confront the dangers ahead.

Xerxer first appeared battling against Yveltal in Vaniville Town. It was later seen talking telepathically to AZ, wishing to join a trainer. Later, it turned out the trainer is Y. After battling alongside Xerxer, Y decided to keep it for herself and nicknamed it Xerxer. When Malva prepared to battle Xerxer with her Yvetal, Xerosic told her to stop, as the two Legendary Pokémon's powers were evenly matched. Xerxer agreed with this, and flew away with Y and her friends, along with some of the Gym Leaders.

Xerxer was stolen by Essentia from Y, who was knocked unconscious. She possessed Xerxer and tried to force it to attack Y and her friends. However, because Xerxer was a legendary Pokemon, Essentia did not have full control over Xerxer. Therefore, Xerxer was able to warn Y of attacks. Using her Absol, Solsol, she was able to Mega Evolve him to fend off Xerxer's attacks. X was able to destroy the device possessing Xerxer, and it became free of Essentia. Her plan failed, Essentia escaped.

When Y and her friends reached Pokémon Village, Xerxer saved Xavier and Blue, before telling the humans that its battle with Yveltal should be left untouched. In the end, Xerxer and Yveltal decided to return to eternal slumber in order to free Zygarde from Lysandre's control, and after giving Y and the rest a telepathic farewell, it turned into its tree state. 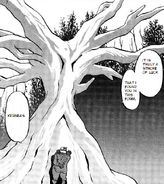 In its tree form
Add a photo to this gallery
Retrieved from "https://pokemon.fandom.com/wiki/Xerxer?oldid=1408980"
Community content is available under CC-BY-SA unless otherwise noted.