For the variant appearing in the games, see Xerosic.

Xerosic is a character appearing in Pokémon Adventures, who is a scientist for Team Flare.

Xerosic respects his leader, Lysandre, and does his tasks to the word. However, he becomes very nervous when things get out of hand. Xerosic can also be ruthless and intimidating, using people for his own plans before sending them away. He also makes pride in his work of the suit Essentia wears, and doesn't like much if the suit malfunctions.

Xerosic was a scientist, who was also a famous inventor. However, he was more interested in ancient technology, hence why he joined Team Flare per Lysandre's invitation. Lysandre also showed that his Inkay should be turned around to evolve into a Malamar, as one should turn their thinking upside down. Lysandre also claimed some things Xerosic understood might be wrong; he showed some homeless people, stating no matter how much one gives, there would be always someone that loses their home. Xerosic still doubted such ethics, but Lysandre claimed they weren't giving equally, but taking equally. Xerosic understood as one shouldn't apply the same ethics to people worth and people not worth saving, to restore Kalos.[1]

Xerosic was standing close to Vaniville Town and observed the battle between Xerneas and Yveltal, then gave commands to take the Mega Ring.[2]

After the battle, Xerosic was searching for Xerneas and found it had revered into a form of a tree.[3] Xerosic reported this to the leader, Lysandre, who went out of the café, where he repaired Trevor's Holo Caster.[4] Xerosic later appeared in Team Flare's headquarters, where he reported to Malva they locked up all the people of Vaniville Town, who would be mind-controlled to move the Xerneas tree.[5]

Xerosic managed to intimidate Clemont to build a powerful weapon, else his Heliolisk would be hurt. Xerosic left off, preparing Essentia for the operation to move the Xerneas tree.[6] After having completed the project, Xerosic sent Essentia to act as a bodyguard and attack anyone that tries to interfere.[7] However, Essentia was nearly defeated and activated her suit, causing her to look identical like X's friends. Xerosic noticed the function to transform herself took too much power out of the suit and ordered Essentia to retreat.[8]

After Celosia managed to snatch Korrina's Key Stone, per Malva's request, Xerosic placed the Key Stone into a ring and gave to Lysandre. Xerosic helped Lysandre equip the gear, preparing him to absorb Xerneas' energy. Xerosic was touched, then ordered the grunts to send Clemont into the incinerator room, since he was no longer useful to them.[9] Xerosic continued to watch as the Absorber stores the energy, until X arrived and faced Lysandre himself.[10] Xerosic watched the battle and commented X may not be a powerful Mega Evolution user, since he did not even Mega Evolve any of his Pokémon against Lysandre. Xerosicd noticed the absorber started to malfunction. Lysandre suspected X's Elec's ability, Lightning Rod, had taken the electricity. Just then, Xerosic, Lysandre and X watched as the tree started to glow and transformed into an actual Xerneas.[11]

Xerosic, seeing the children were being boarded onto Xerneas, who was to escape, sent Malamar to grapple the children. However, AZ interfered and was captured instead, allowing the children to escape on Xerneas. Xerosic was mad, but Lysandre claimed they did not had to capture the children, since the mission was a success. However, Xerosic received reports there were no casualties; only the cities were damaged, but no human lives were taken. Xerosic told this to Bryony, who was also shocked the plan failed.[12] Before he left, AZ warned Xerosic Team Flare's plans were upsetting the balance of Kalos. He noted the Watcher, "Z", has been watching their activities and would soon arrive to restore order in Kalos, just it had done 3000 years ago. Xerosic had no idea what AZ meant by that, but was told the Ultimate Weapon, as well as Xerneas and Yveltal's fighting have made "Z" on the move. AZ left, even if Xerosic wanted to know more.[13] After Malva appeared and started having her Yveltal attack Y's Xerneas, Xerosic appeared and warned Malva the Legendary Pokémon were equal in strength and she wouldn't be able to endure the intense battle, which could've lasted forever.[12] To calm down Lysandre's wrath, Xerosic sought out new territories for their plans. He found the Pokémon Village, where Pokémon, which had been abused by their former trainers, were living.[1][14]

Xerosic ran to the Pokémon Village, where he wanted to report something to Lysandre. He was shushed by Malva, who showed Lysandre training. Lysandre stopped a bit and Xerosic reported Professor Sycamore has found the truth about Team Flare and made his action. Malva claimed they could hide in the base under Lysandre Cafe, but Xerosic warned Professor Sycamore posted his two assistants to watch over it. He also reported a lot of people were distrustful about the media and knew Team Flare was involved in the chaos in Geosenge Town, despite the media putting blame on the Gym Leaders and Vaniville kids. Lysandre decided everyone was to stay in the Pokémon Village and left Malva and Xerosic.[15] Eventually, he and Bryony were at the Menhir Trail. A grunt reported that Mable confirmed the purpose of these stones, which excited Xerosic. He noted these stones had been used as an absorber by AZ 3000 years ago. Bryony also confirmed a scientist with a strange hair told them the stones emitted a strange energy. He noted the stones could still be used to power the Ultimate Weapon up, with the Pokémon they captured to share the life force. Recalling what AZ told him at the Team Flare headquarters, he was concerned Zygarde was watching their activities and went to stop them. Since he did send Essentia to capture Zygarde, he was shocked that Essentia's helmet was broken and tried to contact her. He was concerned Essentia's suit should've been activated to make her retreat. Soon, he found that all connections to Essentia have been severed and were offline.[13] That was due to Lysandre's involvement, as he removed Essentia's limiter, knowing Xerosic had a humanitarian mind for such things.[16]

Xerosic approached Lysandre about Essentia's suit project. Lysandre reminded he gave Xerosic the freedom on the project and stated even if the suit was beneficial for Team Flare, he stopped the project. Xerosic was nervous, while Lysandre explained that there were too many uncertainties with the suit. Xerosic tried to persuade Lysandre, who told he wouldn't repeat himself twice. Xerosic, who knew Lysandre was angry, went to intercept the group that wanted to enter the Pokémon Village. His Malamar's Hypnosis, through radio waves, put all of them to sleep but X and Croaky, the latter attacking with Water Shuriken and bashing Malamar on the ground with its tongue. Xerosic was in shock, how the two were still awake. X pat his head, showing water inside his ears, while Croaky's tongue protected its ears. X intimidated Xerosic, as to why he came to attack them, rather than ambushing them at the Pokémon Village. Xerosic was silent, which made X realize Team Flare didn't want them to enter the village, as something was there.[17]

Malamar attacked Greninja, allowing Xerosic to escape. However, X pushed him to the ground, demanding to know what was in the Pokémon Village. Xerosic admitted the Pokémon Village was a place for abused Pokémon; a fitting territory Xerosic reclaimed to please Lysandre, who was furious. X was surprised Xerosic was terrified of Lysandre; Xerosic confirmed, stating someone like X could never understand that. Xerosic was frustrated his suit project was halted and threw X away. Malamar fired Hypnosis, but Greninja evaded the attack with Double Team. To stop that, Xerosic's Malamar used Topsy-Turvy, then fired another Hypnosis, which made Greninja asleep. With no Pokémon left, X tried to have Salamè come out, but failed. Malamar attacked X, who dropped Salamè's Poké Ball. Xerosic had Malamar crush the Poké Ball, which started to roll out, due to Salamè fleeing. With Salamè cornered, Malamar went to attack, but Marisso came and took the hit, as it wanted to protect Salamè. Malamar used Night Slash on Marisso, who evolved into a Chesnaught. Malamar repeated its attacks, causing Marisso to drop the Poké Ball. Xerosic lifted it, but found it empty. Instead, Salamè came out, while X pointed out Salamè, who saw how others Mega Evolved at Anistar City, was depressed and was waiting to evolve, as it could Mega Evolve, too. Everyone was in shock, while Xerosic was furious that X claimed there was a mistake with Mega Evolutions list Team Flare had made, reminding they still needed a Mega Stone. X claimed there was a reason Salamè was holding its tail all this time, as to protect something valuable. X's friends gasped, while Xerosic was still uncertain why were they all shouting. X had his Salamè blew the fire away from its tail, showing the Mega Stone, which shocked Xerosic.[1] 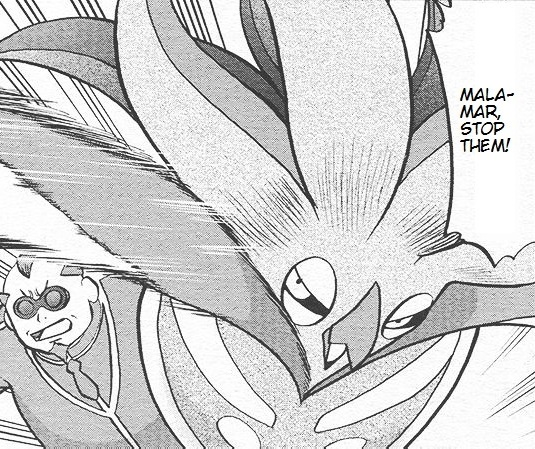 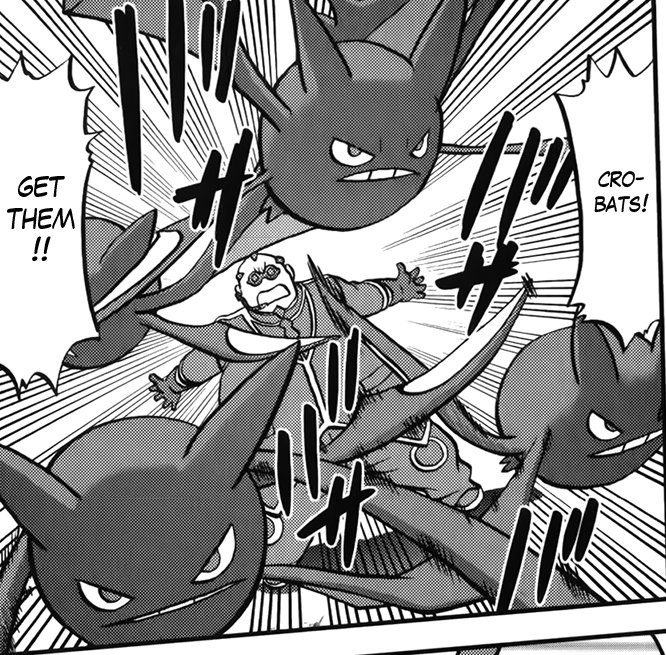 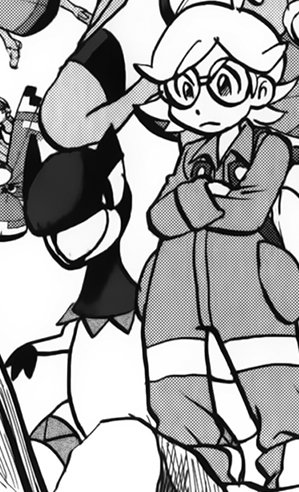 Retrieved from "https://pokemon.fandom.com/wiki/Xerosic_(Adventures)?oldid=1309339"
Community content is available under CC-BY-SA unless otherwise noted.