Xerosic is a character who appears in X and Y and one of the five scientists working for Team Flare, being the Head Scientist overall.

He is completely dedicated to Team Flare's goal, even going against Lysandre's orders to let the player decide the fate of the team; if the player choose the blue button, Xerosic will press the red one to activate the Ultimate Weapon's charging phase out of spite. (Obviously Team Flare's red theme would been the button to press for activating their plan).

After the defeat of Team Flare, Xerosic took to stealing Pokémon from others to seal for funding his research. This brought Looker to Kalos to investigate. Emma went to him for a part-time job, becoming the guinea pig for testing his Expansion Suit; she would be asleep in it and the suit would battle Trainers for their Pokémon. Looker and the player eventually track him down and put an end to his plans. He gives his Pokémon to Emma before being taken away by Looker. 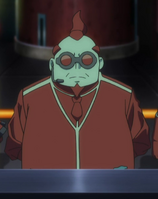 Xerosic in Pokémon the Series (anime)