Xerneas (ゼルネアス Zeruneasu) is a Fairy-type Legendary Pokémon introduced in Generation VI. It is the mascot for Pokémon X. It is Yveltal's counterpart and is a member of the Aura Trio alongside Yveltal and Zygarde.

Xerneas is a quadrupedal stag-like Pokémon with a blue and black coat. Along its back, it has multicolored spots that glow when it is in battle. It has long, gleaming yellow antlers that shine with all of the colors of the spectrum; its antlers resemble the roots of a tree. Its yellow-lined hooves are pointed, and it has a long blue and black tail. When Xerneas is not active, its multicolored antlers stop glowing and turn cyan blue. In the glint of its eyes is the shape of the letter "X", hence the title of the game and when it stands, its body seems to be in the shape of an "X".

Xerneas made its first anime appearance in Diancie and the Cocoon of Description along with Yveltal and Diancie.

A Xerneas appeared in XY040: Foggy Pokémon Orienteering! where it was first seen by Bonnie and Pikachu. After they were saved by the remaining Team Froakie members and Team Squirtle, the two groups saw it again before it retreated to the forest shadows.

Xerneas may be inspired by a deer, most notably the stag that grazes upon Yggdrasil or perhaps the Cernian Hind of Greek Mythology. It also shares aspects of the Tree of Life. It may also take inspiration from Cernunnos, a deity that is often associated with antlers and life-replenishing properties. Cernunnos is also often depicted sitting with legs crossed, furthering this connecting with how an X-shape is often referred to as a 'cross'. Xerneas also moves along the ground, possibly referencing the X-axis on a graph, being horizontal, as opposed to Yveltal who moves through the air, representing the Y-axis, being vertical.

Xerneas' name is pronounced similar to the Celtic god Cernunnos, a deity with antlers, as well as starting with the letter X to represent the X-axis. 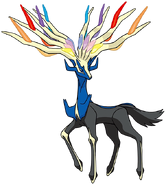 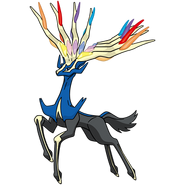 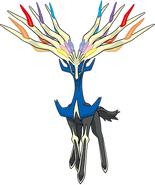 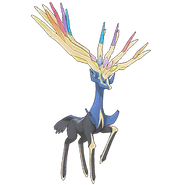 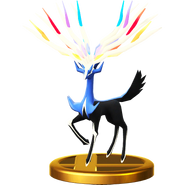 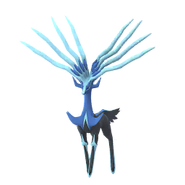 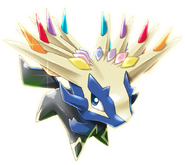 Xerneas as it appears in Super Smash Bros. for 3DS / WiiU. 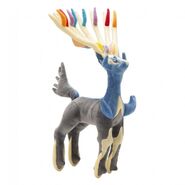 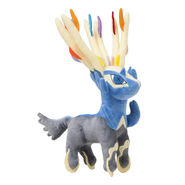 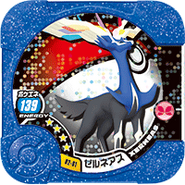