Xatu is a green bird-like Pokémon with features resembling that of a totem pole. Much larger than their pre-evolved form, Natu, Xatu have large, white wings that they usually place in front of them, almost covering their entire front. On Xatu's chest, there is a patch of green with a pattern in it that resembles two eyes.

There is a very subtle difference between the male and female Xatu. On a male Xatu there are three yellow stripes on the lower part of its body, on a female there is only two.

On a few occasions, Xatu have been shown using their psychic abilities in a variety of ways, mainly though, it has been seen using them to predict the future.

Xatu is the evolved form of Natu, as of level 25.

Xatu have made a few appearances throughout the anime, the first of which was in the episode Xatu the Future. In this episode, Xatu were used by a girl named Calista in order to predict the weather. The problem was that one of her Xatu was having trouble making correct predictions.

Xatu again appeared in the episode Me, Myself and Time, under the ownership of another girl named Calista (no relation to the first), who had traveled back through time.

Xatu's third appearance so far, was in the episode Lights, Camerupt, Action!. In this episode a Xatu and a Natu were featured in a movie that was very similar to the actual film Titanic. Xatu's final appearance was in the Pokémon DP Galactic Battles episode Historical Mystery Tour! where it and it's pre-evolved form Natu appeared. 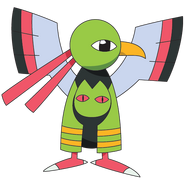 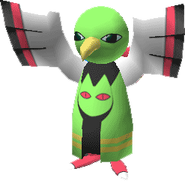 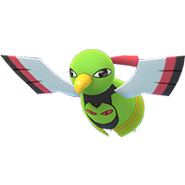 The word 'Xat' refers to a type of Native American Totem Pole. The 'U' might come from Natu, respectively.