For the variant appearing in the games, see Calem.

X, in his ordinary appearance, and in his pajamas.

X is a character appearing in Pokémon Adventures.

This section, or a part of it, has been transcluded from Calem; any changes involving it should be made there instead. /

X is a tall and svelte boy. He has straight, medium length black hair and gray eyes. He is usually seen wearing a red outdoors cap and black ide-frame sunglasses. He also wears a blue zipped jacket with white stripes, blue skinny jeans, black ankle socks, and black short boots with blue laces. He carries around a black two-tone bag with blue decals on it. He wears his Mega Ring on his left wrist.

During the first days of his journey, X wore pajamas - a plain buttoned shirt with a pocket on the left side and a gray collar and dark pants.

As a young boy, X was a very good battler. However, due to paparazzi bombarding him, X became a depressed shut-in. After the Vanville Incident, X realized he needed to do something. He started becoming more active, participated in more battles, and stopped being a shut-in. X is always the subject of Y's yelling. He also has a hatred of Team Flare, and is willing to do anything to stop them from taking over Kalos.

From his years of being secluded alone from society and his peers, he is given the title of Loner.

As a young boy, X won the Juniors' Kalos Pokémon League tournament. Consequently, he was hounded by the press, paparazzi, and fans to the point where he made active efforts to hide from them. One day, he encountered a pair of men associated with the press; the men, curious about Kanga and Lil' Kanga, ignored the Kangaskhan's exhausted condition and the protests of X and Pokémon alike as they tried to drag Lil' Kanga out of Kanga's pouch. A man then appeared, drove them off, and gave X the Mega Ring.

Another day dawns in Vaniville Town outside of X's window. As usual, he refuses to get up or get dressed, even when Y comes to knock on his window and try to get him moving. Even when X hears sounds of destruction and Y screams that there is danger, he refuses to leave his room.

Y leaves for a moment, and while she is gone, Team Flare attacks X, burning his house to the ground and cornering him against a garden wall. They want to steal the ring on his wrist. Y arrives, and Kanga jumps in to defend X and Y from Team Flare's attack. Stricken, X sees Kanga's pain, and suddenly Lil' Kanga attacks and defeats Team Flare, forcing them to retreat. Y forcibly dresses X and puts him on her Rhyhorn to make him leave Vaniville Town.

They travel along Route 1 and arrive at Aquacorde Town, where they stop at an inn for the night. Tierno tries to convince X to choose one of the remaining two of Professor Sycamore's starters, which infuriates X and he refuses. Later, Team Flare admins Mable and Aliana ambush X, attempting to kidnap Lil' Kanga, and X teams up with Professor Sycamore's Chespin to rescue Lil' Kanga and successfully get away from Mable and Aliana.

Once at Santalune City, X puts on the new clothes Y bought for him. He tries to test out Mega Evolution again, battling a wild Litleo and trying and failing to induce the Mega Evolution for Kanga and Lil' Kanga. Viola arrives and offers them a place to stay at her gym. Everyone's willingness upsets Shauna, who thinks that they should stick to their plan not to trust any strange adults; X pats her shoulder, trying to calm her, but Shauna runs off. The remaining four go to Viola's gym, where X battles and defeats her. X smiles, pleased with his victory, but immediately flinches away and blushes when Viola feigns taking a photo with her fingers and compliments his smile.

Later, X comes across Y, Viola, and Shauna; Shauna has attacked Y with a Honedge, hitting Viola instead when Viola jumps to Y's defense. Shauna, who has been possessed by Celosia's Aegislash through the Honedge in her hand, goes on a rampage. X drags Y off to the side, protecting her. X lunges forward with Kanga and Lil' Kanga, about to attack Celosia, when Korrina and her Mega Evolved Lucario appear. Between Korrina and X, and their Mega Evolved Pokémon, they drive off Celosia. Their alliance ends when Korrina hears that Gurkinn gave X a Mega Ring without the proper ceremony and X is not inclined to have the proper ceremony, and she storms off.

They continue on their way to Lumiose City to see Professor Sycamore. On Route 4, Trevor convinces X to do more experiments with Mega Evolution; they give his Chespin Kanga's Mega Stone and see if he Mega Evolves, which, much to Trevor's displeasure, does not. Before they can do more, Chespin spots a Charmander napping in the flowerbeds, and moments later the Charmander rolls over and his tail flame sets the flowers on fire. Y's Froakie quickly puts it out, and Froakie and Chespin approach the Charmander and begin to chat, clearly familiar with each other. Trevor guesses that the Charmander belongs to Professor Sycamore and insists that they take Charmander with them, putting it in the tent with X on Y's Rhyhorn's back. X does not emerge from that tent even when they reach Lumiose City and stare at its tall buildings and bustle in awe. He does not emerge even when two masked figures - Dexio and Sina - kidnap Charmander and Tierno deftly retrieves it.

When they finally meet Professor Sycamore, X gets out to tell the professor that he doesn't want to keep the Chespin because he doesn't want it to be involved in the fights against Team Flare. Professor Sycamore offers to battle him, but X gets angry when Professor Sycamore will only fight him if he uses Chespin, not Kanga. In protest, X sits down and refuses to participate as Chespin fights Charmander. Even so, Chespin's tenacity and refusal to stay down inspire X into trying to help it out by giving commands. Chespin loses, but X is still moved by it and decides to keep it, to Professor Sycamore's surprise and even asks to keep Charmander. The professor, although confused, agrees. X nicknames his Chespin "Marisso," and at some point nicknames his Charmander "Salamé". Once that is settled, X goes to look for his friends, who went to get Trevor's Holo Caster fixed by Professor Sycamore's friend Lysandre. They take the Gogoat Shuttle service to go to the café.

Later, he and his friends go to Prism Tower and wait outside as Professor Sycamore is interviewed for the article about Xerneas and Yveltal's attack on Vaniville Town. After the professor returns, X senses something amiss and rushes inside in time to save Alexa from being killed by a Pangoro sicced on her by her editor. Kanga fights Pangoro as Marisso and Salamé fight a pair of Spewpa. X notices how Charmander and Chespin attack only Spewpa, despite his orders to fight Pangoro. 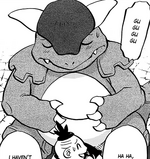 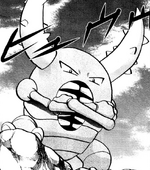 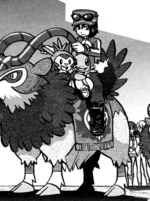 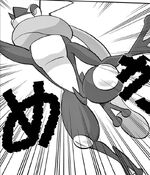 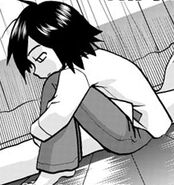 X in his pajamas.

Calem wearing his underwear in X-actly What They Wanted.