After having a dream about her succession ceremony, Korrina is woken up by a mysterious stranger. The stranger points at the battlefield, where Gurkinn is attacked by a Team Flare admin Chalmers. Chalmers' Skrelp drag Gurkinn and Mega Heracross into a pond and try to poison and drown him. However, the stranger steps in to the rescue, whom Gurkinn knows, since she was his student.

Few years ago, Korrina was climbing with her Riolu to a mine. Both were enthusiastic about their expedition, and even saw the space sundial in Anistar City from a distance. Since it was dark, Korrina saw they had to rest, even if she wanted to find the Mega Stone for Riolu. Suddenly, Riolu felt something close, and an object was glittering in a bush at the other side of the canyon. Since the suspension bridge was broken, Korrina decided to use a mine cart. Both of them pushed the cart and started riding it. Before the cart turned to the other side, Riolu used Bone Rush to propel it, making itself and Korrina fly to the other side, enough to fall into the bushes, in which they found something.

Arriving back to the Tower of Mastery, Korrina returned with Lucario, showing her grandfather the Mega Stone they obtained. Korrina is glad she completed the tasks, since her Lucario was drawn to the Mega Stone. Gurkinn claimed she did 99% well, reminding that he should be addressed as "Master Gurkinn" rather than grandfather, and hits her on her head. Gurkinn, who actually injured his hand from Korrina's helmet, claims she did perfectly well, and will commence the succession ceremony. Korrina and Lucario were happy, and Gurkinn ordered them from then on they should be honest, never be ashamed of their words and never conceal their willpower. Korrina didn't understand any of that, so Gurkinn explained she should not contradict herself, mean what she says and show heart in her actions. Korrina and Lucario took the pledge that was passed on their ancestors, and should look back on such words every day.

Gurkinn gave Korrina the glove with the Key Stone embedded into it. Korrina placed the glove, and others clapped for her success. However, Korrina was too nervous to try Mega Evolving Lucario, so Gurkinn had himself and his students demonstrate; they all Mega Evolved Alakazam, Medicham, Scizor and Heracross at the same time. Korrina goes to do so as well, but a voice starts calling on her. In reality, Korrina is woken up by a person. Korrina fears this is a pursuer, and they would start coming after the collapse of Tower of Mastery. Korrina goes to wake up Gurkinn, but he is not present. The person, who is a woman, states there is a pursuer, but it is not her. The woman points at the battlefield, where Gurkinn and his Mega Heracross fight some Pokémon. Gurkinn is glad Korrina finally woke up, who jumps in the battle. Gurkinn notes Korrina didn't sleep well, who states she was dreaming of her succession ceremony; their family was present and there were fireworks at Parfum Palace.

Korrina, however, know Gurkinn has to explain this attack. Gurkinn simply states they were attacked while they were sleeping, as Korrina Mega Evolves her Lucario and blows away the Pokémon. A man comes, noting Korrina's progress. Korrina asks who is he, and the man replies he is Team Flare Admin Chalmers. The Pokémon, Skrelp, drag Gurkinn into the swamp, as Chalmers states the Skrelp know no enemy in the swamp. He also explains the Skrelp disguise themselves as water plants and attempt to drown and poison their enemy, including Gurkinn and Mega Heracross. Korrina yells for her grandfather, but the woman comes, who decides to rescue her master. Korrina heard this last part, as the woman sends a Gardevoir, and chants Gurkinn's words how one should not contradict themselves, be ashamed of their own words and always show willpower. The woman explains she hasn't forgotten her master's words for a day, and has Gardevoir use Psychic to create a vortex, rescuing Gurkinn and Mega Heracross. Chalmers panics, while Gurkinn is glad he was rescued by the woman.

Korrina asks who the woman is. Gurkinn reminds Korrina he did let a lot of people pass the succession ceremony. However, none of them replied, but this girl, who reveals herself to be Diantha, whom he gave her a pendant. Diantha Mega Evolves her Gardevoir, as Gurkinn claims she is the famous actress of Kalos. Chalmers has his Dragalge use Sludge Bomb against Mega Gardevoir's Psyshock. Korrina decides to help Diantha, who explains she has the situation under control. She also tells Gardevoir's ability changed to Pixelate, as Korrina realizes the ability changes Normal-type moves to Fairy-type. Diantha confirms this, as her Mega Gardevoir fires Hyper Beam on Dragalge, defeating it. Chalmers retreats, as the sun starts rising. Korrina was glad they have an amazing team. Gurkinn reminds her granddaughter Diantha won't be always with them, but Diantha denies this, since she came to join them. Korrina asks about her job as an actress, which Diantha states she took a break from for a short time.

Gurkinn states Kalos is in danger. Diantha confirms this, but wonders why the enemy is after Mega Evolution. Gurkinn remembers his enemy, Essentia, who attacked him, but since that figure did not know about Team Flare, he suspects there is another enemy in Kalos. Diantha asks Gurkinn if he knows what happened in Vaniville Town. Gurkinn explains Korrina told him the town was attacked by the Legendary Pokémon, who reverted into different forms: Xerneas into a tree and Yveltal into a cocoon. In addition, the group is informed that the enemy has the possession of the tree, and that their mission is to find the cocoon. Meanwhile, in the Holo-Caster news, Malva reports that Diantha has finished making a movie and went for a long break. However, Malva promises she will pursue Diantha to find out more. 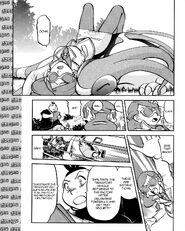 Retrieved from "https://pokemon.fandom.com/wiki/X%26Y016?oldid=1290994"
Community content is available under CC-BY-SA unless otherwise noted.