Tough as an iceberg, hot as a furnace.

Wulfric in other languages

Iceberg Badge
Wulfric is a Gym Leader appears in X and Y. He specializes in Ice type Pokémon and he is Gym Leader of Snowbelle City. He can be found in Pokémon Village, where he explains how it was founded. After this, he returns to the Gym for a battle with the player. After defeat, he blocks the way back into the Gym until the player character wins the game.

Wulfric is a tall and fair-skinned man with light blue eyes, neatly combed whitish-blue hair (along with a beard and mustache), and a very large, yet muscular body. He wears a blue winter jacket with red edges that he keeps open, along with a white tank top, black pants, black boots with red heels, and a spiky black furry ruff around his neck. He also wears a locket around his neck that contains a picture of his wife and children.

The name Wulfric may come from "wolf "(which often live in cold environments), "frigid," and "arctic". Following the plant-based naming of most characters, it could also originate from Wulfenia, a plant genus.

His Japanese name, Uruppu, comes from "wolf" and Urup (a cold, uninhabited island between Russia and Japan). 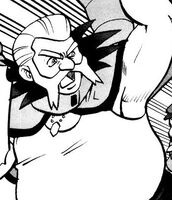 Wulfric in the Masters trailer with Crasher Wake (anime)