Wishiwashi is a small blue-and-white fish Pokémon. It has bright blue markings on its flanks, white teardrop-shaped patterns on its sides and its large eyes have blue puddle-shaped pupils inside.

In its School Form, Wishiwashi combines with numerous others to create a school shaped like a much larger fish. The individual fish in the school are much less detailed, and are of varying shades of blue with glowing eyes.

Small and weak on its own, Wishiwashi is targeted by many predators that see it as an easy meal. In order to defend itself, large numbers of Wishiwashi come together into their massive and terrifying School Form, and their combined power surpasses that of even Gyarados. Alolan sea folk fear Wishiwashi, speaking of it as the "demon of the sea". However, even in large schools Wishiwashi still falls prey to Wailord.

Wishiwashi is based on a sardine or other small schooling fish. Its School Form references how schools of fish band together in large numbers to deter and confuse predators or appear bigger. Wishiwashi's Schooling Form resembles a submarine, shark, or Dunkleosteus. Its Shiny coloration may reference canned sardines, as they usually grow a yellowish-orange color due to oxidation.

Wishiwashi is a play of the term Wishy Washy, meaning to be weak when alone. It may also incorporate fishy, wash, and iwashi (Japanese for sardine). 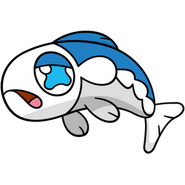 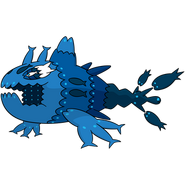 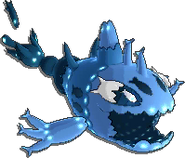 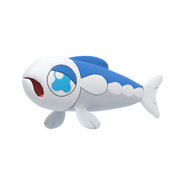 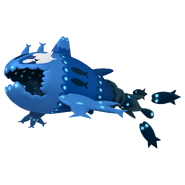