Wimpod are mostly timid and they'll usually run away when they see other Pokémon and people. However, they sometimes will get close to creatures they feel interested, especially the ones that aren't moving.

As they have a habit of storing things they've eaten, not only they're being seen as cleaners of the sea, but also this causes some greedy people and Pokémon like Murkrow hoping to steal the treasures, such as pearls, they have stored.

Wimpod is based on different types of isopods (segmented crustaceans that can often roll up into balls) such as pillbugs, wharf roaches, and deep-sea isopods. It may also be based on trilobites, silverfish (a type of insect that often runs away from things that startle it). Due to its habit of eating rotten things and garbage as well as leaving the ground behind it clean as it runs, it may also be based on robot vacuum cleaners.

Wimpod is a portmanteau of wimp (someone weak or cowardly) and isopod. 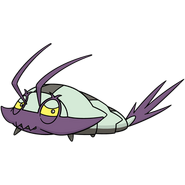