For the variant appearing in the games, see Whitney.

Whitney is a character appearing in Pokémon Adventures, who is the Gym Leader of Goldenrod City in the Johto region.

Whitney is an athletic and lithe young lady. She has fair skin, pink hair that is usually pulled into two ponytails with two small yellow barrettes, and light pink eyes that match her hair color and overall personality.

Whitney wears a white shirt with pink stripes on the sleeves, ends, and down the middle, along with two yellow triangles to the left of her chest. (She also wears a dark blue sports bra underneath her shirt, according to some art of her that was made by Game Freak.) To complete her outfit, Whitney wears small white shorts, black socks that reach her shins, and sporty sneakers that match her shirt, albeit with a blue strap and triangle on the sides.

Whitney wears a white shirt with gold buttons and red stripes over the ends of the sleeves and down the middle, along with denim shorts and long black and blue striped socks that nearly cover her entire shins. Her right arm also has a red wristband, and her shoes have the same red and white pattern as her shirt.

Whitney has a more exuberant and arrogant personality than her game counterpart, as shown when she challenges Gold to a bicycle race around Cherrygrove City.

Whitney was recording a session at the Radio Tower with DJ Mary, when Gold bursted in. He noticed a Smeargle sitting on the bench besides Mary, as Whitney berated him for interrupting their recording. When the manager got angry at the two of them, Whitney directly blamed the commotion on Gold, while he did the opposite. As reports flooded in with positive reviews of the broadcast, Whitney was ecstatic that things worked out so well. She instantly hounded on Gold, stating that she was the one who gave Smeargle to Mary, and the two began to bicker again. The manager alleviated the situation, announcing that Whitney and Gold would race one another from Cherrygrove City to the National Park and back. Whitney proclaimed that she would win the race for Mary, as Gold told her to stop bragging. As the manager signaled Whitney and Gold to get ready, she used her Miltank's Rapid Spin attack to knock Gold off balance. When Gold accused her of cheating, Whitney informed him that there was no pre-ordained rule that said Pokémon were not allowed to be used.[1]

Whitney shot ahead, with Gold in close pursuit. However, Whitney came across a huge tree blocking the route, and the TV crew informed her that they couldn't bypass it. Whitney expressed her anger that Gold would catch up to her, taking it out on the crew. Frustrated with waiting, Whitney ordered her Miltank to attack the tree with Tackle, but the tree was able to withstand the attack. She was surprised at this, as Gold attempted to attack with his Exbo. Suddenly, the ground began to shake, as a giant Rhydon appeared and kidnapped Whitney. Gold used the Sudowoodo to attempt a surprise attack on the Rhydon, which successfully pried Whitney from its grip. However, in the fall, Whitney broke her arm. When they returned to the Goldenrod Radio Tower, Gold proclaimed himself as the victor, which prompted Whitney to state that she would win, if they ever held a rematch.[2]

Professor Elm explained to Gold he researched the metal particles Gold's Aibo had when it scratched Masked Man's mask. Elm found out the mask was made of the material the Gym Badges are made of, including Whitney's Plain Badge.[3]

Whitney and the crew from the Goldenrod Radio Tower came to Mahogany Gym. Once she stepped inside the Gym, Whitney and others began to slide, since the floor was made of ice. To stop themselves, Whitney's Miltank stomped on the floor. The Gym Leader, Pryce, arrived, which shocked Whitney, due to his old age. As Pryce went off, a statue of Suicune started moving. Whitney began her battle by having her Igglybuff and Cleffa use Sweet Kiss on Suicune, followed by Miltank's Rollout. Just as Pryce arrived, Whitney pointed out Suicune has been defeated. Much to her shock, her Miltank was beaten up. Thus, Whitney, despite thinking Pryce was quite old, teamed up with him to catch Suicune.[4] Pryce recalled how the other Gym Leaders fought against Suicune, which surprised Whitney he took a record of others. Pushing his wheelchair, Whitney went with Pryce to battle Suicune and dodged its attack. Once Pryce's Swinub used Powder Snow, Suicune reflected the attack with Mirror Coat. However, the attack was reflected onto Whitney's Miltank, who healed herself with Heal Bell. She also had Mary's Smeargle paint an X on Suicune's head, who used reflections of itself to surround Pryce and Whitney. Once Miltank used Dynamic Punch on Suicune, Whitney threw a Poké Ball to catch Suicune. This left a hole into Suicune and made Whitney cry, thinking she hurt Suicune. On closer look, the group saw it was an ice statue, so Pryce started apologizing, as his Pokémon were using ice powers to creature Suicune statues and make it seem as if it were moving. After the visit was done, the group left, though Whitney claimed Pryce couldn't catch Suicune without her.[5]

Whitney came to the Indigo Plateau, where she and Miltank participated in the Gym Leaders' tournament.[6] Whitney took her seat and watched Brock battle Jasmine.[7] Later, during the Gym Leader tournament, Whitney was arranged to fight against Misty. Her Miltank went to attack with Rollout, but was defeated by Starmie's Hyper Beam and Flash. This ultimately resulted in Whitney's defeat, which made her cry out of frustration.[8] Since Blaine was absent, Clair's battle was postponed and Whitney watched Pryce battling Erika.[9]

Due to Team Rocket having infiltrated into the Indigo Plateau, Whitney battled the grunts. She and the Gym Leaders went into the train, which locked them all in and rode away.[10] She had her Buff Buff and Fafa use Attract on some of the grunts. With the last forces being defeated, Whitney let others know they could have their Pokémon drink Mil Mil's drink to recover. She was also surprised that Lt. Surge managed to separate the carts and had the train go back to the Indigo League.[11] She, Morty, Falkner and Bugsy came back to the stadium, where they met up with the Pokémon Association director. He told that the Masked Man was not even human, since he had a hole inside his body. Whitney was in shock and remembered something.[12] Along with Morty, Whitney confirmed that the Masked Man was actually Pryce.[13] Morty sensed something among the rubble and found Pryce's cane. Whitney recalled Pryce usually tapped his staff and realized he was sending messages through Morse code. In addition, they found a Pokégear inside the cane, making them realize Pryce arranged his plan from the start.[14]

In the end, Whitney returned to her Gym, where she was challenged by other trainers, who wanted to obtain her badge to enter the Pokémon League.[15]

Whitney and Miltank accompanied Gold and Exbo to the Pokéathlon Dome. However, the latter was getting hungry, so he opened a Rage Candy Bar, and tossed one to Whitney to eat. Whitney began choking, to which Polibo sprayed some water on her, as Gold assumed it was too spicy. Whitney became extremely annoyed and shouted at Gold, who bashed his head for being ungrateful that she, as a Gym Leader, was leading the way. Soon, they arrived to the Pokéathlon Dome, where Gold tried to skate away past the people. Whitney became displeased, as she sent Smeargle to Gold to stop him, causing him to crash. Gold became annoyed that he got sprayed with paint. He looked around, wondering if that person had arrived. Whitney dragged him away, thinking he was trying to find another way to cut the line. Since Gold was filthy, Whitney passed him some new clothes: a jersey to participate in the Pokéathlon Dome. Whitney also changed her clothes, and after Gold won the first course, she applauded him for his earned Skill Medal.[16]

Whitney came and greeted DJ Mary, whom she told she was competing, too, to watch over Gold, so he wouldn't cause trouble. As DJ Mary left them to continue her broadcast, Whitney asked Gold which course he'd challenge next. Gold considered of taking on the throwing challenge, to which a Machomp stood over him, as its trainer claimed he'd have the advantage in that course. The Elite Four had arrived, to which Gold didn't know who these people were. Whitney scolded Gold, as these were the Elite Four: Koga, Karen, Will and Bruno. Karen and Whitney remained behind to watch Gold, Koga, Bruno and Will take on the Circle Push, Block Smash and Goal Roll challenges. However, Gold won the Block Smash one, to which Whitney and Karen applauded him. However, he admitted that he came to the Pokéathlon Dome to find Lance, who had information on Arceus.[17]

Whitney was annoyed that Gold didn't mention anything to her about Arceus or Lance. She had Miltank punish Gold, who defended himself, for Oak sent him on the mission. After explaining the events with Oak, Gold claimed that he had to keep this mission a secret, and Oak begged him to go on the mission. Whitney and the Elite Four knew that he was simply a substitute. Suddenly, a Dragonite appeared, and started attacking. Whitney became concerned, and saw as Gold changed his clothes and confronted Dragonite. She wondered if Gold had a plan, to which he smiled as he confirmed: his Togebo was launched to use Double-Edge, toppling Dragonite down and defeating it. Whitney noticed Dragonite was badly wounded, to which Karen mused that it got hurt on its way to the Pokéathlon Dome. As Gold wen with Hiro away, Whitney went on her Miltank to catch up with Gold, wondering what would he do with Professor Oak's mission. Gold claimed that he didn't care much for Lance, and while the police could arrest Team Rocket grunts, he was concerned over Lance's mention of Arceus. Suddenly, Gold had Hiro turn around to Ecruteak City, since he heard about the kimono girls there. He bid Whitney farewell, who smiled, seeing Gold was being a fool again.[18] 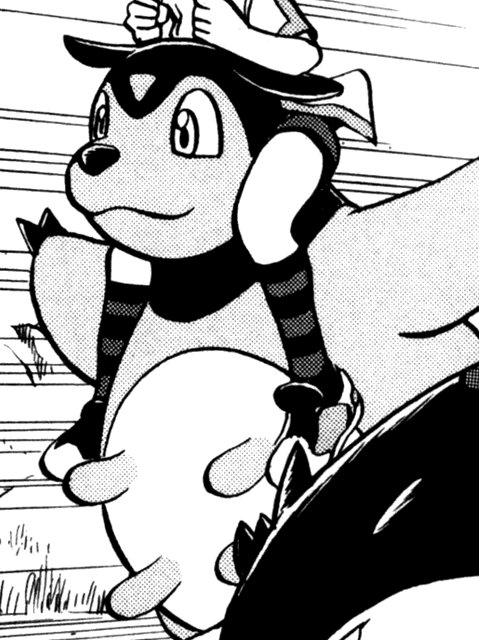 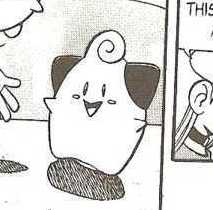 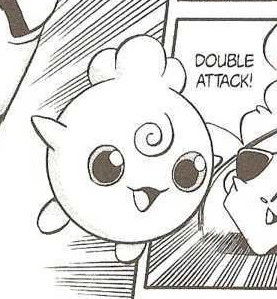 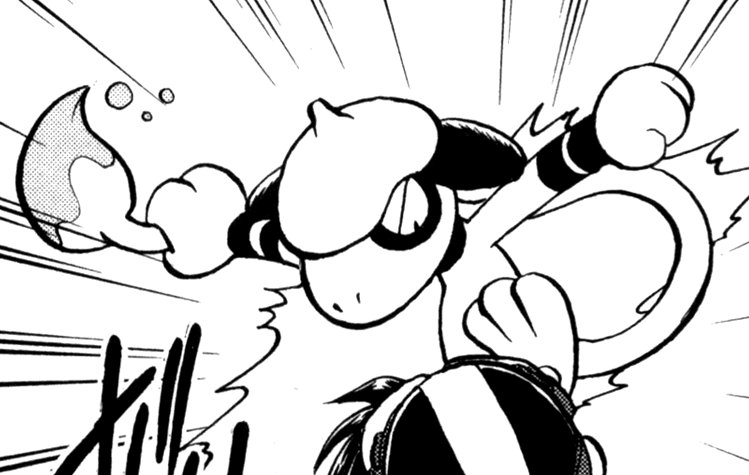 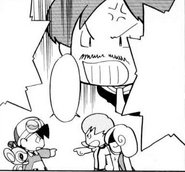 Whitney and Gold argue with one another at the Goldenrod Radio Tower.

Whitney's appearance in Crystal arc.
Add a photo to this gallery

Retrieved from "https://pokemon.fandom.com/wiki/Whitney_(Adventures)?oldid=1290917"
Community content is available under CC-BY-SA unless otherwise noted.