Whitney is the Goldenrod City Gym Leader. She specializes in using Normal-type Pokémon.

Whitney is an athletic and lithe young lady. She has fair skin, pink hair that is usually pulled into two ponytails with two small yellow barrettes, and light pink eyes that match her hair color and overall personality.

Whitney wears a white shirt with pink stripes on the sleeves, ends, and down the middle, along with two yellow triangles to the left of her chest. (She also wears a dark blue sports bra underneath her shirt, according to some art of her that was made by Game Freak.) To complete her outfit, Whitney wears small white shorts, black socks that reach her shins, and sporty sneakers that match her shirt, albeit with a blue strap and triangle on the sides.

Whitney's appearance remains the same as it is in Gold and Silver.

Whitney wears a white shirt with gold buttons and red stripes over the ends of the sleeves and down the middle, along with denim shorts and long black and blue striped socks that nearly cover her entire shins. Her right arm also has a red wristband, and her shoes have the same red and white pattern as her shirt.

If one word could be used to describe Whitney's personality, it would be "chaotic." While her most infamous traits are the fact that she's a sore loser and a massive crybaby, Whitney has a multilayered personality: she is loud, cocky, energetic, cheerful, and slightly ditzy all at the same time. (She is also implied to be gluttonous and an overeater, though she denies it.) Despite her negative traits, Whitney is also social and friendly and respects people that defeat her in Gym battles (though she usually has to cry first before she gives people badges).

The name Whitney comes from "white" (the color associated with the Normal type) and possibly "whiny" (referencing her behavior after the player wins against her).

Her Japanese name, Akane, originates from 赤ちゃん (akachan, baby, either referencing her love of cute Pokémon or the crying fit she has once defeated) or 赤べこ (Akabeko, a legendary cow in Japanese mythology, as she has a Miltank (and later a Tauros) on her team). Following the plant-based naming of most Gym Leaders, it may also involve 茜 (akane, the Japanese name of the madder plant).

Whitney only recently started training Pokémon and was so talented she was given the position of Gym Leader by the Pokémon League, despite her inexperience as a Trainer and slight immaturity (such as leaving the Gym to go to the Radio station to win a Radio Card and crying after she loses). When defeated, Whitney will start crying and will not give the Gym Badge. If the player walks away, a trainer will tell you to talk to her. After Whitney stops crying, she will give the Plain Badge and TM45 (Attract). 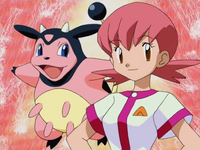 Whitney in Pokémon the Series (anime)

Whitney's VS Sprite in HeartGold and SoulSilver

Whitney's Battle VS Scene in Black 2 and White 2