Whirlipede is a large arthropod Pokémon that resembles a curled-up centipede. Its rolled-up body is segmented. It is mainly purple and black with long spine-like appendages on its front and lower body. Its body is covered in smaller purple spikes. In the center of its body is its large yellow eye. It has light purple scales; on these scales are small red circles. Its curled-up body gives it the appearance of a tire. Storing energy for evolution, it sits. But, when predators approach, it moves to stab then with poison spikes.

Whirlipede is the middle evolution in the series of centipede like Pokémon, evolving from Venipede at level 22 then into Scolipede at level 30.

Although it's similar to Kakuna and Cascoon in nature, it does not evolve from its previous form nor into its final form quite as fast as them.

Whirlipede is based on a curled-up centipede. It looks similar to a wheel.

Whirlipede's appearance is somewhat related to what an ordinary insect will go through at its basic form, which is Venipede, which looks like a centipede, then Whirlipede, which is like Venipede coiling up to begin the stage of development in real life, then evolving to Scolipede, which is the mature centipede.

Whirlipede's English name is derived from the words "whirl" and "centipede". 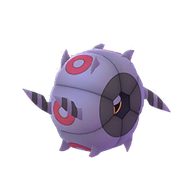