Weavile are bipedal cat or weasel-like Pokémon. The majority of their body is black, with red ear-feathers and two red tail-feathers on their backsides. Additionally, they have a crown-like appendage on their heads, and a red collar around their necks. On their forehead, they possess a yellow gem. Their eyes are red with slitted catlike pupils, and lined with dark eyelashes. Weavile's belly protrudes slightly in some of its sprites, art, and models, giving it a slightly plump appearance.

The majority of Weavile are more clever and devious than their pre-evolution. They live in packs in the wild for approximately five members including lower-class Weavile and Sneasel, and they are good at using their teamwork to hunt down prey. When hunting down Alolan Sandshrew, one will flip it over while the other delivers a fatally devastating blow. Most Weavile live on snowy mountains or forests.

On the other hand, it seems that they have their own language to communicate with one another by making patterns on trees, ice and boulders, having over 500 types of markings for communication purposes.

Weavile are omnivores leaning towards the carnivorous side. They sometimes eat berries but mostly they eat meat. In Alola, Weavile are known to hunt Sandshrew and Vulpix for food. They are also known to prey on Mamoswine.

Despite being described as wicked and callous Pokémon in the human societies, Weavile are loyal companions and will pay their deepest respects to their trainers.

Weavile attack their foes with deadly accuracy, targeting the vital points using their three razor sharp, retractable claws which they sport on their hands and feet. Their scratches can inflict consequential frostbites to their victims.

Weavile is the evolved form of Sneasel by leveling up Sneasel when holding Razor Claw at night.

Weavile and Sneasel may have some inspiration from the Japanese myth of the Kamaitachi: weasels with bladed claws who appear in a whirlwind, traveling in packs of three. They also have traits of weasels, wolverines and cats. The red elements may be based on ancient Egyptian fashion.

Weavile's natural abilities of taking down larger prey (such as Mamoswine) while hunting in packs may also draw inspirations to wolves and other predatory animals that hunt in groups.

Its Japanese name, Manyūra, comes from 魔 (ma, demon), 潜入 (sennyū, infiltration), 鼬 (weasel, which can be read as "yū") and either claw or Ra (from its Egyptian design influences). 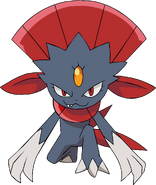 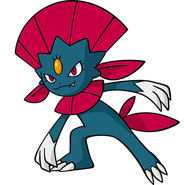 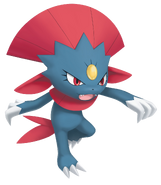 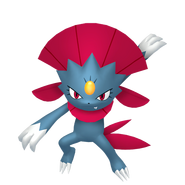 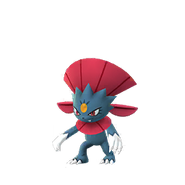