For the variant appearing in the games, see Wattson.

Wattson is a character appearing in Pokémon Adventures, who is the Gym Leader of Mauville City in the Hoenn region.

Wattson is a short, chubby old man with white hair that stands up and has a white beard with a smile, for Wattson laughs a lot. He wears a yellow jumpsuit, with pockets on his hips.

Wattson wears a brown shirt, with a thunder logo on his sleeves. He also wears black shoes.

Wattson wears a green jacket, with thunder print on it. He also wears brown and yellow sandals.

Wattson is a very bubbly and exuberant man, as he is always making jokes when the situation does not call for it, particularly puns of the other Gym Leaders' names. He is also seen to be very enigmatic, as Wattson does not care where Gym Battles take place, so long as he can fight. Wattson also has a habit of giving the Dynamo Badge out to Trainers who lose, so long as they try their hardest. However, Wattson is shown to have very strong emotions about the environment, as shown when he sides with Team Magma due to their goal to expand the land in the Hoenn region. Wattson also cares deeply for young children, as shown when he gives his Dynamo Badge to the children whom he fought, out of sheer compassion.

When Norman took the Gym Leaders' test in Johto, Wattson was present with the Pokémon Association director. However, Norman failed and took the blame for the incident with Rayquaza.[1] Wattson remembered these events and understood his sacrifice.[2]

Sometime after, Wattson, along with Lt. Surge, were researching Pikachu and related Pokémon for its special move. They dubbed it as Volt Tackle; the discovery was written in a magazine that Red showed to Gold.[3]

Sapphire thought of the Gym Leaders, including Brawly, whom she had to battle against for the bet she had with Ruby.[4][5]

Wattson revealed himself before Sapphire alongside the Trick Master when the former sprang the latter's trap. The two friends congratulated each other upon capturing the wild Donphan, but were surprised when Sapphire was caught inside the trap. Sapphire revealed to Wattson that she fell into another underground trap, as he realized that she found the secret entrance to the underground city, New Mauville. When Sapphire led them to the spot where she fell, Wattson and the Trick Master became exhilarated at their findings.[6]

However, before Wattson could make another step, a group of kids challenged him to a Pokémon battle. When Wattson defeated them easily, he gave them Gym Badges as consolation, much to Sapphire's surprise. Wattson handed Sapphire the Dynamo Badge, as a show of thanks for her finding the entrance to New Mauville. However, Sapphire refused to take it from Wattson, swatting it from his hands. Wattson commented upon her serious nature, as the badge embedded itself onto the fleeing Donphan's hide. The three were shocked at this new development, as the Donphan pursued Wattson and the others. Wattson sought refuge inside the trapdoor leading to New Mauville, but disappeared shortly afterwards. When Wattson's Electrike and Magnemite arrived on the scene, Trick Master deduced that something must be draining their bodies of electricity. Sapphire told Electrike to take her to Wattson, who was attached to the out of control power generator, alongside his Pokémon. When Sapphire attempted to free Wattson from the device, it emitted a beam of electricity.[7]

As the automaton pursued Sapphire and the Trick Master, they devised a plan to assist Wattson. However, Wattson apologized to Trick Master, as the automaton charged up another attack. Sapphire utilized Donphan's Rollout attack, freeing Wattson in the nick of time. Upon reading the inscription on the back of the automaton, both Wattson and Trick Master realized that the person who created it was Trick Master's ancestor. When they pressed a red button underneath the plaque, the entire New Mauville transformed into an amusement park, and Wattson's dream was fulfilled. Wattson thanked Sapphire greatly, granting her the Dynamo Badge, which she accepted.[8] Winona also warned Flannery about Sapphire, who obtained the badges from Roxanne, Brawly and Wattson.[9]

Later, Wattson answered the summons from Flannery to assemble at Fortree City. He arrived on his Manectric alongside Brawly and Roxanne. When Flannery adjourned the meeting, she announced that Team Magma wants to use Groudon to increase the land mass of the Hoenn region, which Wattson wholeheartedly supported. He explained his reasoning for supporting them, as Mauville City had suffered due to a lack of land. When Wattson told Norman that his siding would decide who the Gym Leaders will ally themselves with, Norman stated that he didn't support either one of them. As Norman prepared to leave on his motorcycle, Wattson followed him outside, commending his skills when Norman defeated a wild Shiftry with ease. Wattson stated that Norman should put his abilities to good use in this conflict, apologising for the rashness of the other Gym Leaders. He informed Norman that they were not aware of what happened 7 years ago, as Norman silenced him.[2]

Later, when Winona brought Sapphire to Tree Tower, Wattson and the other Gym Leaders approved of her decision to rally the Trainer's support.[10][11] Seeing how the Gym Leaders gathered in Fortree City to battle the crisis, Ruby ran away, since he felt he was a nuisance to all of them.[12] The Gym Leaders also watched as Kyogre resurfaced and started a tsunami, which flooded the cities.[13] The Pokémon Association director sent Wattson and Flannery to deal with the areas affected by flood from Kyogre.[14]

Eventually, Flannery and Wattson started to battle Kyogre. Flannery also contacted Winona, but the link was soon cut off. Still, Wattson claimed they both will do their best.[15] Flannery was glad Wattson launched an attack on Kyogre with his Manectric. However, they both took damage after Kyogre used Calm Mind.[16] Winona also told Sapphire she hateed how the Gym Leaders were putting their lives at stake, while she and Sapphire were unable to do anything.[17] Flannery and Wattson continued to battle Kyogre. However, when Winona came under attack from Aqua Admin Shelly, Wattson told Flannery to assist her. However, Wattson commented that he wasn't nearly powerful enough alone to stop it, as Aqua Admin Amber appeared before him. Amber confirmed Wattson's suspicions, revealing that Kyogre was acting upon Archie's commands.[18]

Wattson evaded Amber's Pelipper's attacks, as Flannery informed him that Amber was the commander in charge at Mt. Chimney. Amber stateed that leaving the Gym Leaders preoccupied with them was Archie's strategy, in order to allow Kyogre to advance. Watson proclaimed that he would not lose to Amber, who sent out his Nincada, given to him by Shelly. Manectric tried to use Roar, but failed, while Nincada evolved into a Ninjask. Ninjask used its speed to overwhelm Wattson, who had Manectric use Thunder. Both Pokémon were knocked out, but Wattson laughed, since Amber had stopped. However, Amber told him a new Pokémon was formed in Nincada's evolution. Thus, his Shedinja attacked Wattson and knocked him to bottom of the ocean.[19] Winona tried to rescue Wattson, but Matt's Sharpedo used Taunt on her Altaria.[20] However, Wattson was soon rescued by Sapphire's Wailord. After Flannery and Winona came to Wattson, they also noticed a box, containing info about Team Aqua's headquarters, so they went to Hoenn Route 134.[21] Once they arrived there, they found Professor Cozmo being tied up. After rescuing him, Winona took him, Wattson and Flannery to the airship. Wattson wanted to help more, but Winona ordered him to stay and relax.[22]

Scott told Norman about the crisis and how the Gym Leaders were fighting Team Aqua and Magma admins, which forced Norman to go awaken Rayquaza.[23] Once Groudon and Kyogre retreated, the director was glad the Gym Leaders, the Elite Four, the Champions, as well as Ruby and Sapphire, have successfully defeated Groudon and Kyogre.[24] On the Pokémon Association's airship, Wattson watched how Groudon and Kyogre fled from Sootopolis City.[1] Since Wattson had battled long enough, the Trick Master went on the generator to Sootopolis City to help in the fight.[25]

At the end of the conflict, Wattson congratulated Ruby and Sapphire on their achievement, on the airship. He later returned to New Mauville alongside Trick Master, and was seen playing on the automaton ride.[26]

Wattson decided to help in the meteorite crisis and went with the Gym Leaders to Sootopolis City.[27] There, per Steven's orders, Wattson launched an attack, which merged with others' attacks and shattered the meteorite.[28] 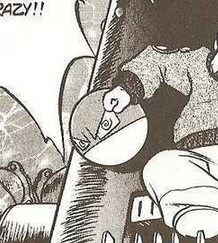 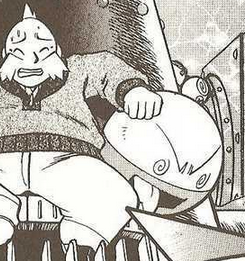 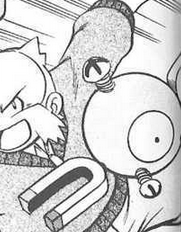 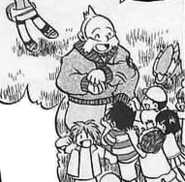 Wattson showcasing his kindness to children. 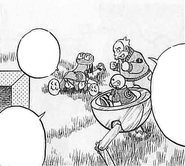 Wattson and Trick Master watch Sapphire search for the trapdoor. 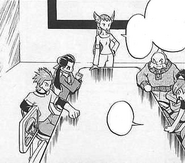 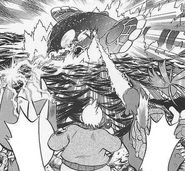 Wattson attempts to stop Kyogre in its tracks. 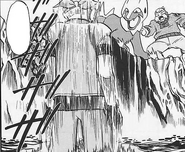 Wattson's appearance in Ruby & Sapphire arc.
Add a photo to this gallery

Retrieved from "https://pokemon.fandom.com/wiki/Wattson_(Adventures)?oldid=1137737"
Community content is available under CC-BY-SA unless otherwise noted.