Watchog (Japanese: ミルホッグ Miruhoggu) is a Normal-type Pokémon introduced in Generation V. Its classification is the Lookout Pokémon.

Watchog is a bipedal, rodent-like Pokémon that bears a resemblance to chipmunks, groundhogs, and meerkats. It has small black eyes surrounded by hypnotic red and yellow rings. It is mainly rust-colored, with its puffy cheeks and neck a light beige color, and yellow stripes wrapping around its torso and tail. Its front and hind paws are white, as is the furry tip of its tail. Its arms seem to be crossed over its chest, possibly hiding a white tuft of fur. The yellow patterns on its chest resemble a worker's yellow safety vest. Watchog uses bio-luminescence to illuminate its eyes and the yellow patterns on its body; the flashing of light they produce stuns their foes.

Watchog never blink or close their eyes, even when submerged underwater. Like Patrat, they live in large groups (though these groups are known as “clans” rather than “mobs”). These Pokémon can go for days without sleep and can remain standing completely still for similar periods of time.  Watchog are constantly on the lookout for danger. Members of a clan will arrange themselves so that they can see approaching foes from every angle. When Watchog spot trouble, their tails will stand straight on end and the fluorescent bands on their body along with their eyes will glow, both alerting their allies and unnerving approaching enemies; the initial flash of light has been known to temporarily blind attackers. Their friends will scramble back into their tunnels and shovel as many seeds as they can in their cheek pouches (like Patrat, Watchog keep their food in a communal pile underground), surfacing back up to shoot kernels at the foes.

It has the abilities Illuminate and Keen Eye.

Watchdog is the evolved form of Patrat as of level 20.

Watchog shares traits with rodents such as chipmunks and groundhogs. It also resembles a meerkat. It may also be based on a police officer, as the markings on its body resemble a police vest and it works to keep others of its species/evolutionary line safe from threats. The color of its vest-like markings are similar to a safety vest of a road worker.

Watchog comes from watch, groundhog, and possibly watchdog (due to its tendency to intently watch for predators).

Its Japanese name, Miruhog, may be a combination of meerkat (since it is shown to stand like one) and groundhog (from its appearance). 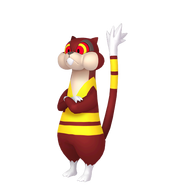 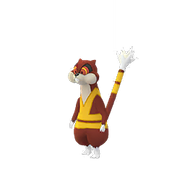