Wartortle (Japanese: カメール Kameeru) is a Water-type Pokémon introduced in Generation I. It is the evolved form of Squirtle.

Wartortle (pronounced as WAWR-tawr-tull) are small, bipedal, turtle-like Pokémon with a similar appearance to that of their pre-evolved form, Squirtle. Some differences are that Wartortle have developed sharper and larger claws and teeth. Their tails are larger and fluffier than Squirtle's. The fur on Wartortle's tail darkens with age. Wartortle have developed large furry ears. Like its pre-evolved form, it can also use its shell to protect itself. Its shell bears the scratches of many battles.

Wartortle has the abilities of Torrent and Rain Dish.

Wartortle first appeared in the anime series in the episode Beach Blank-Out Blastoise. During this episode, a large number of Squirtle and Wartortle, along with their leader, a Blastoise, had fallen asleep on an island and could not wake up.

May owned a Squirtle, which evolved into a Wartortle at some time while she was in the Johto region. It is seen as a Wartortle in Staging a Heroes' Welcome! and Pruning a Passel of Pals!.

Pokemon GO! - 008 Wartortle caught
Add a photo to this gallery 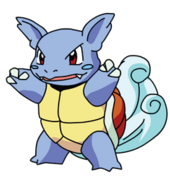 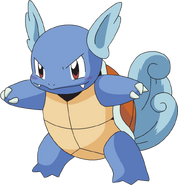 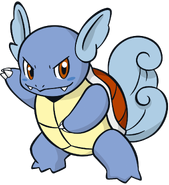