Wallace's artwork in Omega Ruby and Alpha Sapphire, Emerald and in Ruby and Sapphire.

Wallace is a character appearing in Generation III and VI. He is a Gym Leader in Ruby and Sapphire and Omega Ruby and Alpha Sapphire, and the Champion of the Hoenn region in Emerald. He is the only person with the Trainer Class, Sootopolitan (ルネのたみ, Rune no Tami, Citizen of Sootopolis, lit. "Citizen of Rune").

Wallace is a tall, thin young man with light blue eyes and teal blue hair that curls gracefully around his head. He also wears a white beret.

Wallace's appearance is the same as in Ruby and Sapphire. As a Champion, he sports a ripple-edged long cloak, which is white on the outside and teal on the inside.

Wallace wears a long white pants, which are connected to his teal upper shirt, leaving certain spots near his belly bare. He also has a purple undershirt, which covers a part of his chest. Wallace also wears green, transparent stripes from his shoulders and a small, ripple-edged white cape, as well as a pair of tri-bracelets on his arms.

Wallace is calm, cool-tempered, very elegant and graceful, and somewhat flamboyant. He is very kind and respectful of the player character when challenged. He has a great passion for the sea and Water-type Pokémon. Upon defeat as a Champion, he will express his amazement in the battling skills, joyously complementing the player character in a poetic manner and proclaiming them the new Champion of the Hoenn region.

The name Wallace come from "water".

His Japanese name, Mikuri, could come from 水 (mizu, water), 美 (mi, beauty) and 海 (umi, ocean). Following the plant-based naming of most Gym Leaders, it could also literally be 実栗 (mikuri, a type of reed).

Wallace is the Gym Leader for the Sootopolis City Gym.

Wallace steps down as a Gym Leader in Emerald and gives the position to his former teacher Juan while replacing Steven Stone as the Champion. Wallace specializes in Water-type Pokémon and has Milotic, Gyarados, and others.

Wallace plays largely the same role as he did in Ruby and Sapphire.

In addition to the role he plays during the main game, Wallace unseals the Sky Pillar, but he challenges the player once more before allowing the player's entry. At the end of Delta Episode, Wallace and Steven are seen in Steven's chamber in the Hoenn Pokémon League, with Steven asking Wallace to "be behind him to lend him a hand", for someday, when he pursues his own hopes, he wishes Wallace to be with him. Wallace accepts. Wallace and his Milotic participate in Contest Spectaculars as a Master Rank participant of the Beauty Category, after becoming Champion. 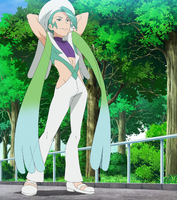 Wallace in Pokémon the Series (anime)

Wallace's Battle VS Scene in Omega Ruby and Alpha Sapphire

Wallace in the Delta Episode in Omega Ruby & Alpha Sapphire.
Community content is available under CC-BY-SA unless otherwise noted.
Advertisement