For the variant appearing in the games, see Volkner.

Pokémon Journeys: The Series,
Pokémon the Series: Diamond and Pearl

Volkner is a character appearing in Pokémon the Series, who is the Gym Leader of Sunyshore City in the Sinnoh region.

This section, or a part of it, has been transcluded from Volkner; any changes involving it should be made there instead. /

Volkner is a young blue-eyed man, who has spiky blonde hair. He wears a black T-shirt over his collared blue jacket, which has yellow details and black sleeves. He also wears black pants, and gray shoes, which have volt markings on the soles. Volkner also has a chain around his left hip. When he was a child, he looks the same as his adult self.

Volkner has been a passionate Trainer, and worked hard with his friend, Flint, to become a pro Trainer. However, as he grew older, Volkner became less interested in battling, even as Flint tried to convince him. This went as far as to ignore Trainers' requests and simply hand them the Beacon Badge.

After meeting Ash, he saw how challenging battles could be, and became interested in battling strong Trainers once more.

The name Volkner comes from "volt" (the unit of electrical potential).

When Flint was young, he encountered Volkner. Defeating his Pikachu, Flint became Volkner's rival, who trained hard to overcome him, and eventually won. The two guys continuously battled one another, testing each other's strength. One day, Flint and Volkner encountered a poacher, and battled his Houndoom. Volkner's Pikachu nearly got hurt, as Volkner grabbed it to prevent it from getting slammed to a tree. Despite getting badly hurt, Volkner and Flint did not give up and defeated the poacher.

While Flint became the Elite Four, Volkner became Sunyshore City's Gym Leader. Since then, Volkner grew disinterested in battling: he gave Beacon Badges away, and was more focused on installing solar panels to power the Gym.[1]

Flint was visiting his friend Volkner at the Sunyshore City's Gym when he encountered Ash Ketchum and his friends, who were attacked by a robot. Flint had Infernape attack the robot to save them, and took them in the Gym. Inside, he encountered Volkner's Raichu, who hugged him. Volkner appeared as well, whom Ash wanted to challenge. Volkner still had no interest in taking challenges and offered Ash to take the Badge anyway, even if Flint tried to persuade him to do otherwise. The group left to a restaurant, where Ash pondered thoughts about battling Volkner, who was the strongest Gym Leader.

Flint told them how powerful and passionate a Trainer Volkner was, to which the latter walked in. Flint wanted Volkner to battle Ash, but Volkner simply replied they were not kids anymore, angering Flint. A bartender advised them to let Flint battle Ash instead, while Volkner watched their battle, with disinterest. At the Gym, Flint's Infernape battled Ash's Buizel, which didn't impress Flint. Ash sent Infernape to battle Flint's. However, Flint's Infernape easily blocked its Flame Wheel and defeated it with its own Mach Punch. Volkner grew even more disinterested and was about to leave.

When Pikachu was sent out, it held its own against Infernape, as it collided using Volt Tackle against its Flare Blitz. Volkner started to remember how determined he was to battle the poacher alongside Flint, and compared himself to Ash. Pikachu was ultimatively defeated, while Volkner started to recognize why he should continue tending to his Gym Leader duties. While Ash lost, Dawn reminded he did have the honor to battle the Elite Four, while Volkner was moved enough to agree to battle Ash.[1]

Soon, Volkner and Ash began their Gym battle, having Luxray battle Ash's Grotle. However, it was quickly interrupted as Team Rocket stole the Sunyshore Tower, causing a city-wide blackout. Volkner went with the group and climbed upon the tower with Ash and Flint. As Flint fell down, Volkner grabbed Ash to prevent his fall, and entered the tower through a hatch. Inside the tower, Volkner apologized to Ash for this inconvenience, but was determined to return the tower to its place. Volkner and Ash went to the observatory to confront Team Rocket, but were captured in a cage. Ash and Volkner had Raichu and Pikachu attack the cage to get out, but Team Rocket's Seviper and Carnivine hit them.

Grotle made its attempt, and evolved into a Torterra, blasting Team Rocket away with Leaf Storm. Sealing the hole created by this attack, Ash and Volkner had their Pokémon power the generator to land the tower. However, as both the tower and Gym were badly damaged, Volkner told Ash that he would call him when the repairs would be finished so they could have their match.[2] With the Gym repaired, Volkner faced Ash in a rematch, and had other challengers wait until Volkner could face him.

Volkner's Electivire blocked Torterra's attacks and froze it with Ice Punch. This forced Ash to swap Torterra with Pikachu, whose Thunderbolt got absorbed by Electivire's Motor Drive Ability. In response, Pikachu's Static Ability paralyzed Electivire, and the latter was defeated by Iron Tail. Volkner admitted how fun battles can get, and sent Jolteon out against Ash's Infernape. Jolteon launched a barrage of Shadow Ball attacks, but Infernape defeated it with a quick Mach Punch. As his final Pokémon, Volkner sent Luxray out, to which Ash sent Pikachu. Pikachu attempted to counter its Shock Wave, but failed and got defeated by that attack. Volkner wanted to give his all to battle Ash, who sent Infernape out.

Infernape attempted to dodge Luxray's attacks, but got bitten by its Thunder Fang. In the middle of the battle, Team Rocket shut down the generators, causing the lights to be switched off. In addition, Infernape's Blaze was activated once again. Ash managed to calm Infernape down, as it was able to take control of its Ability. Despite getting hit by another Thunder Fang, Infernape punched Luxray away with Mach Punch and defeated it with Flame Wheel. Volkner gave Ash the Beacon Badge, thus allowing him to enter the Sinnoh League. He also admitted how thrilling this battle was, too.[3]

Volkner also appeared in the ending scene of the 13th Pokémon movie, along with his Raichu.[4]

Volkner, along with his Luxray, appeared as a silhouette in a fantasy, foreshadowing the future opponents Ash would face in the World Coronation Series.[5] After Ash and Goh had completed partaking in the Pokémon Catching Adventure Race, Ash received a sudden notification on his Rotom Phone. Upon checking, he found an invitation to his next World Coronation Series battle, revealing his next opponent to be Volkner.[6]

Upon hearing about the invitation, Ash and Volkner met up in order to battle. As Goh and his Grookey watched from the audience, Ash and Volkner both had a furious back-and-forth battle. Ash used his Pikachu, Gengar, and Lucario while Volkner used Rotom, Luxray, and Electivire. After lots of battling, it came down to a one-on-one battle between Pikachu and Electivire. To ultimately take victory, Ash used his Z-Power Ring to perform 10,000,000 Volt Thunderbolt with Pikachu, causing Electivire to faint and the crowd to erupt in cheers as Ash rose in rank in the World Coronation Series. Despite his loss, Volkner was proud of Ash for his victory and stated that he may even be able to battle in the Master Class with the skills he showed in battle.[7] 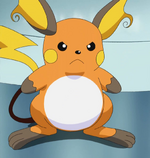