For the variant appearing in the games, see Volkner.

Volkner is a character appearing in Pokémon Adventures, who is the Gym Leader of Sunyshore City in the Sinnoh region.

Volkner is a young blue-eyed man, who has spiky blonde hair. He wears a black T-shirt over his collared blue jacket, which has yellow details and black sleeves. He also wears black pants, and grey shoes, which have volt markings on the soles. Volkner also has a chain around his left hip.

Volkner lacks motivation, which he is trying to find by challenging strong opponents, due to his status as the strongest Sinnoh Gym Leader. Since it was a long time since he faced such opponents, Volkner's laid-back nature makes him wasteful of electricity, due to having his Gym redecorated with many appliances and machines. Upon finding a strong opponent, Volkner becomes much more interested for Pokémon battles.

The name Volkner comes from "volt" (the unit of electrical potential).

Volkner was at the Gym, awaiting a challenger. A power plant worker came, to which Volkner assumed he was his challenger, and sent Elekid and Raichu to battle. The power plant worker denied, which made Volkner disappointed, as he expected a great battle, and was why he had the Gym renovated. The power plant worker was annoyed, for Volkner was the one draining Sunyshore City's electricity, and shut down some of the machines. Volkner apologized, but reminded the people also bore responsibility that he had no matches that could make his heart leap with joy. Suddenly, Volkner received a call, and took his jacket on, as he was going to meet up with someone that would inspire him through a battle.[1] Byron contacted Volkner, and told him to face a terrifying opponent, whom neither Candice nor Maylene could defeat, which sparked an interest in Volkner to lend the two Gym Leaders some strength.[2]

Volkner awaited Candice, Maylene and Platinum at the field, who were surprised to see he came early. He expected to have a battle from a great challenger. Candice and Maylene corrected him, as they came to train with him. Volkner became disappointed, and had his Raichu electrocute them. He wanted to go home, and explained that Byron told him he'd have a Gym challenger coming to him. Volkner was about to leave, but gained interest in Platinum, who spoke that the enemy was too powerful for them, who even threaten Sinnoh's existence. Volkner thought Platinum was another Gym Leader, but got yelled at by Candice. Platinum introduced herself, and asked Volkner to battle her, to show how powerful the enemy was. Volkner took an interest, and sent Elekid to test the speed, Raichu to test the defenses and Electivire to test the attack power. Platinum conducted the battle, and explained the tactics of the enemy, Jupiter. Volkner became intrigued, considering Platinum remembered all of her enemy's tactics, words and characteristics. It was why he promised to give her the Beacon Badge if she defeated him. He also promised to face Maylene and Candice in battle, to train all of them. The girls were happy, while Platinum continued her battle against Volkner.[2]

Platinum won the battle against Volkner, who awarded her with the Beacon Badge. Since Platinum went to Veilstone City, Maylene and Candice remained behind to train with Volkner.[3] Volkner received a message, to have all the Gym Leaders go atop Mt. Coronet to fight the enemy. Volkner ignored the call and deleted the message, then walked away with Raichu and Elekid. He noted he had to go through the Spring Pass to reach Sendoff Spring, but stopped when he saw space being warped.[4] After Maylene and Candice finished their training, Volkner gave the former a Pachirisu, to pass it to Platinum. He believed it would power Platinum up for the battle.[5] Flint was talking with Volkner over the phone. Volkner described that he was going to Sendoff Spring by taking the Spring Path, until he encountered a big hole. Flint laughed, and asked Volkner what he had felt. Volkner admitted he felt joy, as he sensed a very powerful enemy he could battle. To that, Flint asked Volkner to team up to investigate, and admitted he was at the Battle Zone.[6]

Eventually, Volkner and Flint arrived with Magmortar and Electivire to the Fight Area of the Battle Zone.[7] Ever since they arrived to the Battle Zone, Flint and Volkner battled hundreds of trainers to grow stronger.[8]

Looker and Platinum remembered Volkner, due to his powerful status, for he was connected to the rest of the Gym Leaders, as well as the Elite Four and Frontier Brains of Sinnoh region.[9]

Volkner was with Flint, who received a call from Buck. Flint greeted Buck, and mentioned that he and Volkner were making research about Stark Mountain, and found a mention of a treasure: the Magma Stone. Flint went to warn Buck about the enemy, but the connection was severed.[10]

Volkner and Electivire looked at the group heading away, and wondered if Flint would follow them. He noted that there were a group of trainers from the battleground that were angry about Buck being hurt, and noted they weren't the only ones that were furious. Flint asked him not to remind him of that, for he and Magmortar swore to take vengeance on the man that hurt Buck.[11] The two looked to the sky, but found no interdimensional holes. Instead, they went into the Turnback Cave. Flint attempted to scare Volkner of monsters, to which Volkner punched him in the knee. Flint, however, claimed the following fight was not to get revenge for Buck, as they entered the cave. Volkner noted the fog, and sensed Flint was just excited, instead of scared. Flint confirmed his words, and the two turned around, as they were ambushed.[8]

Volkner and Flint were battling Giratina itself in the Distortion World. The two were having a lot of fun battling such a strong opponent, and decided to use stroger moves, even if they were risky. Volkner's Electivire used Discharge, while Magmortar used Lava Plume to attack Giratina, who resisted the attacks and hit them with Dreagonbreath.[12] When Giratina saw Dialga and Palkia, it ignored Volkner and Flint. The two guys were angry that it moved away from them, as their battle was not over yet.[13]

Shauntal met Volkner and took a photo of him, even though he didn't want to be photographed. She also took notes of him, wanting to write a novel based on the notes.[15] 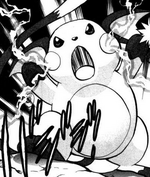 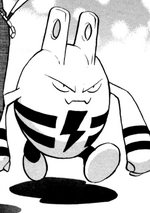