Volcarona has access to an exclusive move known as Fiery Dance, which increases the user's Special Attack stat. It also has access to two abilities; Flame Body allows Volcarona to indirectly inflict burn status if the opposing Pokemon damages it with a direct contact move. Swarm increases Volcarona's Bug-type moves if Volcarona has less than half of its HP.

Volcarona releases flaming scales during flight. It has been feared by many villagers and is often referred to as "the rage of the sun". Tales have been told of Volcarona emerging from a cocoon and saving people from the cold.

Volcarona made its first appearance in BW080: Guarding the Guardian of the Mountain!.

Volcarona is a moth with some traits of seraphim, which were described in the Bible as fiery angels with six wings. This could be a pun on one species of moth, whose scientific name is Olceclostera seraphica. It may also be based on the kaiju Mothra from the Godzilla movies, similar to how Tyranitar draws inspiration from Godzilla and Hydreigon from King Ghidorah. It might also take inspiration from the saying "like a moth attracted to a flame".

Volcarona is also based on the sun motif, since its wings resemble a sun when fully opened as well as the fact that it has been known to replace the sun if the sky is darkened by volcanic ash.

Volcarona's name is a portmanteau of "volcano" and "corona", which is the top layer of the atmosphere of the sun. It is fitting, as Volcarona is referred to as the "Sun Pokémon". 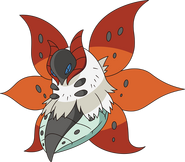 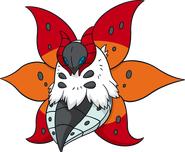 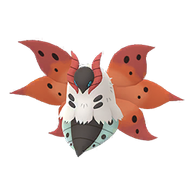