Volcanion (ボルケニオン, Borukenion) is a Fire/Water-type Mythical Pokémon introduced in Generation VI. It was first revealed on December 14, 2015.

Volcanion is a maroon, quadruped Pokémon with blue and yellow markings on its body. It has blue eyes and a sharp yellow mustache. It has two "arms" with blue circles and it has four yellow diamond-shaped markings on its chest. It has four huge legs, with three claws extended on each foot. Its tail is short and thick.

In order to conceal itself and vanish, Volcanion releases plumes of steam. It has been said to inhabit certain mountain areas that are considered forbidden for humans to walk. Some people believe that this Pokémon may dislike humans because it was alive to witness the horrible destruction that the great war of Kalos left behind 3,000 years ago.

Possessing a specialized organ that is actually its arms, Volcanion is able to instantly convert water vapor into steam. The converted steam is launched at high pressure, having enough strength to destroy mountains.

Volcanion appeared in the movie, Volcanion and the Mechanical Marvel.

Volcanion seems to based on felines, specifically big cats like lions and tigers which may lead it to possibly being based on Komainu, statues that are often carved to depict these animals. Its mechanical features resemble a tank, and its typing seems to be based on geysers or steam engines, with its arms resembling the pumps of an engine.

Volcanion comes from volcano and lion, or a possible deformation of the word cannon or engine. 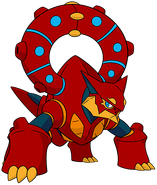 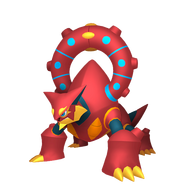