Viridian City
The Viridian City Gym (トキワジム, Tokiwa Gym) is the Gym of Viridian City led by Giovanni in Generation I. He specializes in Ground-type Pokémon. Later, after his rematch with Red, he is replaced with Blue/Green. Blue, unlike Giovanni, does not specialize in any type, though in Red, Blue, and Yellow, most of his Pokémon are Ground-type. Blue remains the Gym's leader in the later generations who uses all types of Pokémon.

This time around there are no tricks to the Gym, similar to Olivine Gym. It's just a straight path to the Gym Leader.

In HeartGold & SoulSilver, the gym is open after the player interacts with Blue on Cinnabar Island while having the other seven Kanto badges. The gym features a maze with arrow panels and trainers that have Pokémon using Trick Room. After finding the right paths, the trainer will find Blue. 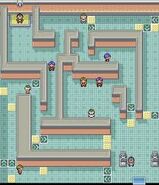