The Young Flame Strikes Back!

Viren in other languages

Viren is an antagonist appearing in Pokémon the Series: Sun & Moon.

Viren is shown to be the very selfish and greedy owner of Rainbow Happy Resorts, building the resorts throughout Alola by illegal means and avoiding any punishments from the sorts of crimes he committed.

He arrived at Paniola Ranch, keen to buy it in order to turn it into a resort hotel. After Kiawe and his family declined, he began to harass them and destroying their properties, which infuriated Kiawe. As a result, Kiawe challenged him to a battle, where Kiawe's unsuccessful attempt at using a Z-Move with Marowak gave Viren the win, but retreated due to an interference from Kiawe’s friends.

Viren returned the next day and had a rematch against Kiawe, and finally being defeated by him. Despite this, diggers approached the farm for an excavation and was ready to destroy it, only for Sima, Mimo, and Rango to stand their ground, joined by Kiawe’s friends. Unfortunately for him, Rango already informed to Officer Jenny early, when the officer arrived in time with an arrest order against him for forging land owner documents, trespassing, and malicious destruction to properties, arresting Viren and his underlings.[1]

He later returned when he revealed himself to be the boss of the Revengers from behind the scenes. He reveals his plan to claim the position of the Royal Dome's strongest and then buy it to make the Royal Dome a part of the Rainbow Happy Resorts. Viren challenges the Masked Royal and his new partner Ash Royal to a revenge match. After the Revengers are defeated, he attempts to challenge the masked fighters himself with his Pangoro, but Incineroar and Torracat swiftly send Pangoro flying out of the ring and into its Trainer, knocking them both out. It’s unknown what happened to him and the Revengers afterward.[2]

He returned again where he was seen constructing a resort, supposedly without any illegal means. He encounters Ash when his Poipole doodled on the wall. Two days later, an Ultra Beast known as Stakataka moved from the Pokémon School to Viren’s construction site, where he and his workers mistook it for a pedestal. Viren thought it might be a suitable place to put his golden statue for people to see. When the Ultra Guardians (the same Pokémon School kids he encountered) arrived, he got annoyed by their presence (especially Ash's) and told them to leave, ignoring their warning about an Ultra Beast. When Poipole noticed the wooden box containing Stakataka, Viren placed his statue on top of Stakataka and showed it off to the Ultra Guardians, who were unimpressed and called it tacky, even stating that it looked nothing like Viren. Then, Stakataka got up and tried to shake the statue off, but couldn't as the golden statue was stuck with glue. Eventually, the Ultra Guardians knocked the statue off Stakataka and tamed it, causing it to retract its legs and sit on the ground, where it ended up scaring Viren with its multiple eyes. After Stakataka was caught, Viren was freed and saw his ruined statue, causing him to cancel his resort plan in favor of forming a Pokémon Baseball team and building his own stadium.[3] 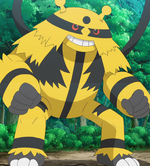