The camerawoman who never lets a single smile escape her focus.

Bug Badge
Viola is the Santalune City Gym Leader and a user of Bug-type Pokémon. She is also a professional Pokémon photographer and the younger sister of Alexa.

Viola is a slim young woman of medium height. She has blonde hair cut in a chin length bob which curls under, with two slightly longer, thin locks which hand in front of her ears, green eyes and a pale complexion. She wears a white vest, greyish- green cropped pants with lots of pockets and a white belt, brown ankle boots with laces that match her trousers and a matching sweatband on her left wrist. She is also often seen with her camera.

Viola is a kind-hearted person, who sometimes helps her sister, Alexa, in journalism. Viola also loves taking pictures, being a determined photographer. Viola is a righteous person and, even if being quite hurt, does her best to protect others.

The name Viola, which is both her English and Japanese names, could be an anagram for "Voila!", which is usually said after completing an impressive task. In her case, it would pertain to her photography. Her name could also come from the "violin" beetle or could also comes from "Viola", a genus of skippers (butterfly-like insects). Following the plant-based naming of most characters, it could also literally be "Viola", a genus of flowering plants.

Viola in Pokémon the Series (anime) 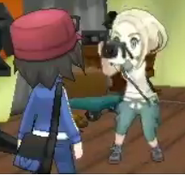 Viola taking a picture of Calem before doing their Gym Battle.
Community content is available under CC-BY-SA unless otherwise noted.
Advertisement