Vikavolt (クワガノソ Kuwaganon) is a Bug/Electric-type Pokémon introduced in Generation VII. It is the final evolved form of Grubbin and evolves from Charjabug after being exposed to a unique magnetic field or, in Generation VIII, a Thunder Stone.

Vikavolt is a beetle-like Pokémon that is equipped with a pair of long mandibles. It has a orange-colored face and two yellow robotic eyes. Vikavolt's entire carapace is dark blue in color while its abdomen has a light gray coloration. Its wings are flat and transparent with a light blue color. Short spikes each line along the inside of Vikavolt's mandibles.

Vikavolt produces electricity through an electric sac within its abdomen. It is able to release its electrical energy from its mouth by firing it as powerful beams, similar to a railgun. Vikavolt can clamp onto a Charjabug and use it as an extra battery in order to launch more powerful electric blasts. It uses these blasts to protect against bird Pokémon.

Vikavolt has the ability Levitate, which makes it immune to any damaging Ground-type moves.

Grubbin evolves at level 20 into Charjabug. Charjabug evolves into Vikavolt when leveled up at Vast Poni Canyon.

In the Galar Region, Vikavolt now evolves from Charjabug via a Thunder Stone since there aren't any special magnetic field available. 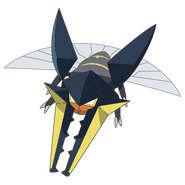 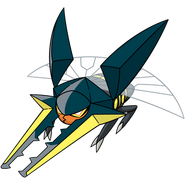 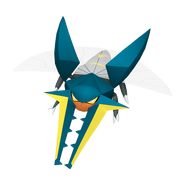 Add a photo to this gallery
← Charjabug | Vikavolt | Crabrawler →
Retrieved from "https://pokemon.fandom.com/wiki/Vikavolt?oldid=1245385"
Community content is available under CC-BY-SA unless otherwise noted.