Victini is a small cream-colored rabbit-like Pokémon with round bright blue eyes, long pointed flame-orange V-shaped ears, and small orange paws and feet. The front of Victini's ears are orange, while the interior of its ears are cream colored and black. It has little orange hands with three claw-like digits; Victini often forms the "V" for "Victory" sign with its hands. Its orange feet are small and it possesses two claw-like toes. It has small, cream-colored wings on its back which allow it to fly; however, Victini will often levitate using its psychic powers. It has two pointed fangs which can be seen on its upper jaw when it opens its mouth.

Legends claim that trainers who possess a Victini will never lose, no matter what kind of battle they encounter.

Victini possesses an unlimited force of fiery energy blazing within its body; it can share this energy with other beings (both people and Pokémon) by touching them, filling them with incredible supernatural strength. In the anime, Victini is shown to be able to become invisible.

Victini is the only Pokémon that can learn the move Searing Shot and V-create.

Victini is a very shy and elusive Pokémon. It will often become invisible and only reveals itself to those it trusts. However, being a Fire-type, Victini's temper will flare up if it feels the need to defend its friends.

Victini does not evolve.

Victini has a major role in the movies Pokémon the movie: Black - Victini and Reshiram as well as Pokémon the Movie: White - Victini and Zekrom. In Japan, Victini with the moves Fusion Flare, Fusion Bolt, Searing Shot, and V-Create were given out to promote the new movies. It was shown that Victini was fond of macarons that Cilan had made. The group used these to lure Victini out of being invisible to show they meant no harm and that Victini shouldn't be scared.

Victini was the cause of a war 200 years ago because thousands of people wanted victory.

In the round "At Liberty on Liberty Garden", Black and White arrived on Liberty Garden after Professor Juniper sent Black to gather Pokédex data about Victini. In truth, it is revealed that Team Plasma has been chasing Victini for three days, intending to shelter it. Black defeats Team Plasma and saves Victini. He gathers data and sends it to Prof. Juniper.

Victini's appearance seems to be based on a rabbit, specifically うさぎリンゴ usagi-ringo, a method of cutting apple slices to make them look similar to rabbits, usually resulting in the ears appearing as a V-shape. The concept of this Pokémon clearly draws inspiration from Nike, the Greek winged goddess of victory (as Victini possesses feathery wings on its back. "V" is also the roman numeral for the number five, the number generation Victini comes from). It may also be based on a fennec fox. The common pose that it strikes (usually holding up two fingers) is reminiscent of most victory poses in media as well as also utilizing it's "V for Victory" motif. 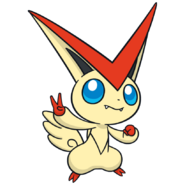 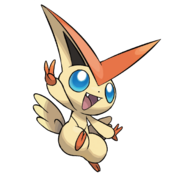 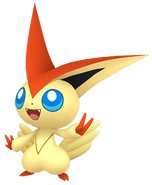 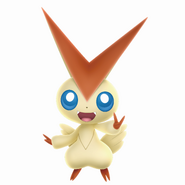 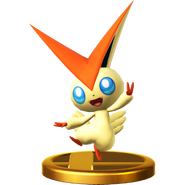 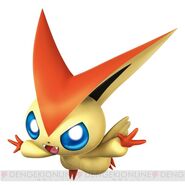 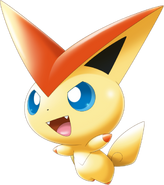 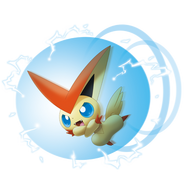 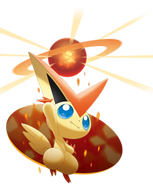 Victini with Hilbert and Hilda 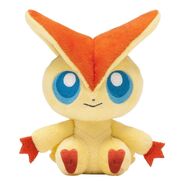