Voice of the Forest

Vicious (better known as the Iron-Masked Marauder) is an Elite Officer of Team Rocket, but he attempted to take over Team Rocket with Celebi.

He first appeared interrogating an old Pokémon hunter for info about a Celebi he had pursued years ago. But when he refused, he decided to show him his Dark Balls by using one to capture a Tyranitar. When the Tyranitar became evil by the Dark Ball's power it began destroying the hunter's camp, In fear, he showed Vicious where to find the Celebi.

Vicious then set out for the forest in a large mecha. He eventually came upon Ash, Misty, Brock, Sam and the hurt Celebi, but failed to capture it when the Team Rocket trio got in the way, but they quickly offered to join him after they recognized him.

Vicious then sent out his Sneasel and Scizor to pursue the heroes while he followed in his mecha. Eventually, he discovered his Pokémon tied to a rock. After that, Vicious and the Team Rocket trio carried on, leaving his Pokémon behind.

Despite his searching, Vicious failed to find Celebi. However, he quickly abused the group as they attempted to return to run, with Jessie, James and Meowth blocking their escape route. Destroying a few trees, Vicious finally managed to grab Celebi with his mecha, then captured it in a Dark Ball horrifying everyone. Ash attempted to save Celebi with the help of a flock of wild Pidgey. After the resulting struggle, he quickly reclaimed the Dark Ball by stepping on Ash's hands.

Surrounded by mad wild Pokémon, Vicious decided to send evil Celebi's power on them, sending it to attack the wild Pokémon and destroying the forest. After that, Celebi absorbed the surrounding debris, creating a spiked sphere and proceeded to ride deeper into the forest. Along the way, Jessie had been accidentally sucked into the construct, but Vicious welcomed her, as he needed her to witness Celebi's power and relay the information the their boss. With that, Vicious had Celebi transform its construct into a huge wooden monster that began to attack the forest and the Lake of Life, revealing his intentions to usurp Giovanni as leader of Team Rocket and conquer the world. As the power of Celebi had driven him mad.

When Ash and his friends arrived to try and save Celebi, Vicious sent the Pokémon's attacks against them. Ash, Pikachu, and Sam were then saved by the arrival of Suicune, Prompting Vicious to send out his Tyranitar to try and defeat it and catch it. Although it was beaten, Vicious remained confidant as he sent Celebi to destroy them. He watched Celebi trap and torture Suicune, but consequently missed Ash, Pikachu and Sam's infiltration of the construct. When the torture paused when Celebi tried fighting the Dark Ball's power, Vicious attempted to keep Celebi under his control, claiming that the heroes were its enemies. Ultimately, Ash and Sam's pleas won out and Celebi snapped out of its control, Destroying Vicious' Dark Ball and knocking him into the lake.

Vicious made a last effort to capture Celebi after its recovery, bursting out of the Lake of Life when the Pokémon flew over. He attempted to escape with his jetpack, but Ash and Pikachu manage to grab onto his leg. Vicious was then electrocuted by Pikachu's Thunderbolt, destroying his jetpack causing them to fall. Celebi saved Ash and Pikachu, but Vicious was left to fall. Although he survived his fall, his mask was knocked off and his remaining Dark Balls were destroyed.

He was last seen being berated by Towa and then being tied up by String Shot from the other wild Pokémon. He was arrested afterwards shortly before Celebi's near death. 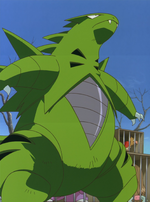