Vespiquen (Japanese: ビークイン Biikuin) is a Bug/Flying-type Pokémon introduced in Generation IV.Vespiquen is only obtainable by evolving a female Combee as it is only female.

Vespiquen is a three-foot tall humanoid bee that has a red gem on her head, with a hive around its abdomen that looks like a ballroom dress with one horizontal stripe and six openings where baby Combees are born and cared for. She also controls other Combees to heed her commands to defend, heal, and attack. Just like real bees and wasps only a female can become queen, hence only female Combees can evolve into Vespiquen. Although most bug-types are weak in defense, Vespiquen is an exception, along with Shuckle.

Vespiquen has the ability Pressure. Pressure makes the foe lose 2 PP of the move it used to attack the foe. Vespiquen has the most known signature moves of any Pokémon that involves a swarm of Combees. One it uses for attacking, the other it uses to raise its defense. The last one heals its HP.

Vespiquen is the evolved form of a female Combee as of level 21. Vespiquen are only Female. 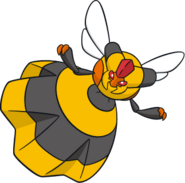