Template:Venusaur Venusaur (Japanese: フシギバナ Hepburn: Fushigibana) is a Grass/Poison-type Pokémon. It is the mascot for Pokémon Green and Pokémon LeafGreen and the final form of Bulbasaur.

Venusaur is a large, dinosaur-like Pokémon that is somewhat similar in appearance to its pre-evolved forms, Ivysaur and Bulbasaur. Its skin still retains a light turquoise color, but it no longer has the spots, and it appears more rough and scaly, with bumps here and there. The former bulb on its back has now fully bloomed into a gigantic flower and its ears have lightened up as well. Female Venusaur are slightly different because they have a seed on their back, which shows that it can give birth to a new Bulbasaur.

Female Venusaur have bulbs sticking out of the tops of their flowers.

Venusaur absorbs sunlight to gain energy and to feed its flower, located on its back. After gaining a certain amount of sunlight, the flower will release a sweet aroma said to soothe the emotions of people. Additionally, after a rainy day, the smell of the flower's aroma grows stronger, attracting other Pokémon.

Venusaur evolves from Ivysaur at level 32. It can mega evolve into Mega Venusaur using the Venusaurite.

In Super Smash Bros. Melee, Venusaur is one of the Pokémon that can be freed from the Poké Ball item. When freed, it uses the move Earthquake, a Ground-type move. It covers a lot of ground and launches opponents with great vertical knockback.

Venusaur is a combination of 'Venus fly trap' and 'Dinosaur'.

Venusaur was confirmed to be based on frogs by Ken Sugimori, in a Japanese interview that was discussing the Pokémon franchise in general. When asked to describe the basis of the design behind the Bulbasaur line, Sugimori had stated that it was "a creature that is something like a frog." In another interview, Sugimori described the origin and the basic themes of the original starter Pokémon: "[T]he experience of keeping small animals such as frogs (Bulbasaur), lizards (Charmander), and baby turtles (Squirtle) as pets gives the game a sense of reality and makes it easier to get into the game. I realized it might be difficult to make an emotional connection if the first partner Pokémon is a tough-looking character."

Venusaur's large, rounded snout, wide mouth, wide-set eyes, bumpy, wart-like skin, & quadruped-like movements are vaguely similar to those of certain amphibians, such as the common toad. Unlike Bulbasaur, and like Ivysaur, Venusaur's "ears" do have hollows, indicating that they are in fact ears and not glands, as seen in many species of frogs and toads.

The flower on its back resembles the Rafflesia arnoldii. 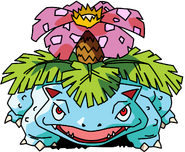 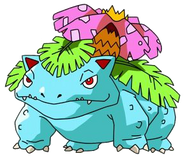 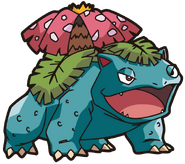 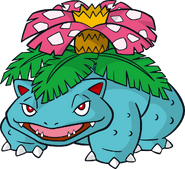 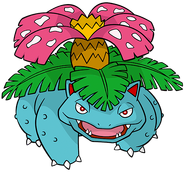 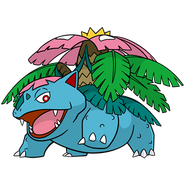 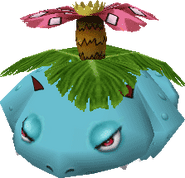 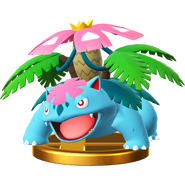 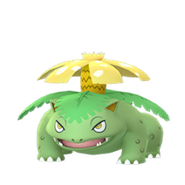 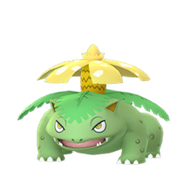