Vanillish are icy Pokémon that resemble large ice cream cones with a sizable scoop of vanilla ice cream for a face. Vanillish have large, snow-covered, round upper bodies with a swirled icy snow-like material on top, resembling a scoop of vanilla ice cream. Vanillish has a cheerful goofy grin on its face. Its large ovular eyes have dark blue pupils. Like its pre-evolution Vanillite, Vanillish has small diamond-shaped ice crystals on its face, just below its dark blue smiling mouth. Vanillish has two short triangular limbs that resemble chips of pointed ice, which seem to serve as its hands. It has a conical lower body that resembles a large ice cream cone or an icicle. Its entire body is made of an icy substance, and if exposed to intense heat, the snow covering its head can melt (just like its pre-evolution). 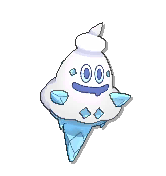