For the variant appearing in the games, see Valerie.

Valerie is a character appearing in Pokémon the Series: XY and XYZ, who is the Gym Leader of Laverre City in the Kalos region.

This section, or a part of it, has been transcluded from Valerie; any changes involving it should be made there instead. /

Valerie has long black hair that reaches her knees, her eyes are wide and in the color of purplish-gray. She also wears purple hairclips slightly resembling the ears of an Audino and string-like tendrils, as well as a purple choker. Her outfit resembles a stylized kimono spliced with a gothic-lolita style. The sleeves bear the resemblance to butterfly wings with pink, mist-like patterns followed by a yellowish-cream color and tipped with black. She wears a pale yellow corset intertwined with purple strings and lined with butterfly patterns with strings. She also wears a short, puffy skirt with the color of pale purple, pink, and black with frilly ends. Finally, her outfit is completed with black socks with renaissance flairs on the top, and black high heels with bright pink soles and ribbons.

Valerie is a calm Gym Leader, who prefers surprising her opponents with unexpected moves, twisting the field to her presence. Valerie also prefers beauty, being a fashion designer herself, even causing her Pokémon to look different than they may seem in the battle.

The name Valerie comes from "faerie", an alternate spelling of "fairy" often used to sound more antiquated or fantastical. It could also come from Valerianella locusta, a leafy vegetable.

Her Japanese name, Māshu, may come from 魔法 (mahō, magic) or the French "mâche" (an edible plant called lamb's lettuce or raiponce, which plays a pivotal role in the fairy tale Rapunzel).

Valerie is the famous clothes designer, who takes her inspirations from Pokémon and nature. One day, she was told two of her known models couldn't arrive to her fashion show and was slightly worried, even making her Pokémon sad. Luckily, her other models found Bonnie and Serena, making the latter honored to be in Valerie's presence (even if Bonnie wanted Valerie to be a bride for Clemont). Nevertheless, they accepted Valerie's proposal and wore dresses, along with Braixen and Dedenne, displaying themselves on the catwalk. Valerie noticed Sawyer, her newest challenger, and asked him to come to the stage for the Gym match, startling Sawyer a bit. Sawyer sent Bagon to battle Spritzee. Bagon used Dragon Breath, but the move had no effect, due to Spritzee being immune to dragon-type moves. Bagon attempted to headbutt Spritzee, who defeated Bagon with Dazzling Gleam. Valerie thanked Sawyer for the battle and left, allowing Ash to see the Gym Leader he would fight next.[1]

The next day, the heroes entered Valerie's Gym, where Ash faced Valerie in a two-on-two Gym match. Valerie sent her Sylveon and started speaking to it, shocking Ash she had that ability. Valerie replied she can communicate with Pokémon, in a special way, but Ash sees he can also understand Pokémon, by their feelings. Ash sent Fletchinder, who was hit by Sylveon's Disarming Voice and its attacks canceled by being entangled by Sylveon's ribbons. Fletchinder soon freed itself by burning Sylveon by using Flame Charge. Sylveon used Giga Impact, but was defeated by Fletchinder's Steel Wing. This shocked Valerie and her assistants, the latter knowing that was the moment Valerie's battle got very serious. Valerie sent Spritzee, whose Trick Room allowed Spritzee to become faster and defeat Fletchinder with Dazzling Gleam and Gyro Ball. Ash sent Hawlucha, who was also affected by Trick Room and got hit by Moonblast. Ash had Hawlucha use X-Scissor on the Trick Room, damaging the effect. Spritzee used Gyro Ball on Hawlucha, who took the damage, but also used X-Scissor, bashing Spritzee onto the Trick Room and canceling the move. With Flying Press and High Jump Kick, Hawlucha won the battle. Valerie called Spritzee back, for she felt being one with her Pokémon during these difficult challenges. Ash understood her and was given the Fairy Badge.[2]

Valerie was seen watching Lysandre's broadcast from Lumiose City where he revealed that he was the leader of Team Flare.[4]

Ash remembered his gym battle against Valerie and her Spritzee and them fighting the Giant Rock with the rest when he was reflecting back on his journey.[7] 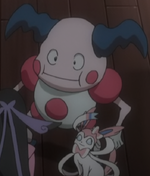 Valerie, in the Gym, ready to battle Ash