For the variant appearing in the games, see Valerie.

Valerie is a character appearing in Pokémon Adventures, who is the Gym Leader of Laverre City in the Kalos region.

Valerie has long black hair that reaches her knees, her eyes are wide and in the color of purplish-gray. She also wears purple hairclips slightly resembling the ears of an Audino and string-like tendrils, as well as a purple choker. Her outfit resembles a stylized kimono spliced with a gothic-lolita style. The sleeves bear the resemblance to butterfly wings with pink, mist-like patterns followed by a yellowish-cream color and tipped with black. She wears a pale yellow corset intertwined with purple strings and lined with butterfly patterns with strings. She also wears a short, puffy skirt with the color of pale purple, pink, and black with frilly ends. Finally, her outfit is completed with black socks with renaissance flairs on the top, and black high heels with bright pink soles and ribbons.

Valerie, despite being a Gym Leader, is slightly childish, persistently asking questions to everyone. However, she takes care of beauty and order, terrified to see the beauty of the Ultimate Weapon, which would destroy Kalos.

When Korrina was hospitalized, Valerie tended to her bedside,[1] and she later joined Grant and Olympia and visited the injured people at Laverre City's hospital. After introducing herself, Valerie was worried, for nobody told her about Team Flare's plans - even noticing strangers at the Poké Ball factory, and yet Korrina and Viola, who were attacked, did not mention a word. Valerie started shaking Trevor, but Cassius replied it was best if they all remained silent, for Team Flare had their agents everywhere. Later, Valerie asked Trevor if the Laverre City's tree looks grander than Xerneas in its tree form. Before Trevor could answer, Valerie was pulled away by Olympia's Meowstic, since Olympia, Grant and Valerie had to prepare to battle Team Flare.[2]

Valerie, Olympia, and Grant joined Ramos and Wulfric, then sailed on Wulfric's Avalugg to Laverre City. There, the children from Vaniville Town joined in the attack on Geosenge Town. Upon seeing the Ultimate Weapon, Valerie was shocked something that beautiful could be very deadly. Everyone sent their Pokémon to push the "bud", with Valerie sending her Mr. Mime.[3] To let other Pokémon push the Ultimate Weapon, who could not fly, Ramos advised Valerie to have Mr. Mime use the power to solidify the air. However, Bryony appeared and attacked Mr. Mime, who dropped many Pokémon down, as well as Valerie. Valerie wondered how Bryony knew about this, but Ramos felt Bryony had read parts of the Pokémon Battle Encyclopedia.[4]

To protect themselves, as well as Y and the other Gym Leaders, from the blast of the Ultimate Weapon, Valerie and Olympia had their Pokémon create a barrier from the blast. After Y managed to befriend Xerneas, everyone held Xerneas, including Valerie, as Xerneas flew off, retreating from the site of battle.[5]

Valerie and the other Gym Leaders fought against Team Flare, eliminating their presence in other cities before they went to the Pokémon Village.[6] In the end, Valerie came with Professor Sycamore to congratulate the group of Vaniville Town for defeating Team Flare.[7] 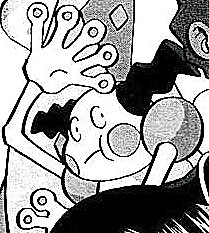 Retrieved from "https://pokemon.fandom.com/wiki/Valerie_(Adventures)?oldid=1156123"
Community content is available under CC-BY-SA unless otherwise noted.