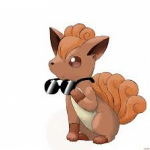 -- Bullet Francisco (Talk) 00:43, 22 October 2011
Things NOT to do on my talk page: #1 NO CURSING WHATSOEVER I don't care if you censor it if you replace it with another word that isn't a curse word i don't even care if you say bleep instead of said curse word! #2 no posting hurtful or rude pictures such as a wolf's head being chopped off. #---.....i guess that's it.

Hey, remember me? I was on chat with you once. If you need help, leave me a message! –

At the end of every mesage, please add four tildes (~) or click the signature button so it is easier for peole to contact you.–

Nope I do not, Gen 3 Pokémon made me dislike and fall out with the series for years!! Only recently has my love of Pokémon been repaired but I am forced to ignore the Over Powered animal which, let's face it, belongs on my plate!! SunXia (Chat) 10:04, October 23, 2011 (UTC)

I agree that Vulpix is awesome!

A blog post is like posting news and stuff to an online board. This wiki doesn't have it anymore because we all thought there was no use for it. Chat could be a substitute so it was disabled. –

Under friends, if you want to add Nalupie, type in User:Nalupie|Nalupie with a [[]] surrounding it. It should look like this: Nalupie. That is how to do a link. If you want to add me, type in User:Bmltera|Bmltera and add [[]]. the "|Bmltera" changes what the link looks like. That means that Pikachu can be a link to me. I can add the friends in myself for you if you don't mind. –

Hello. I am here to tell you of our user image policy which states that a user can only have three personal user images uploaded to the wiki and with your somewhat recent uploads you have exceeded your limit. Please mark the extra images for deletion with the {{Delete}} template or they will all be deleted. Also, you may want to just use images already uploaded to the wiki so you don't have to worry about the policy.  Crims

You were kicked because you were flooding the chat, I removed the user group, feel free to rejoin.  Crims

Hey vulpix! I voted for you on [[Template:User_of_the_Month/Nomination|this page]]. It was a hard choice between you and slaying but I knew you first. You should get more people to vote for you. – Bmltera Reply 03:29, January 27, 2012 (UTC)

Hi, Vulpix, umm, there's an issue with your walkthrough page, "Vulpixisawesome1424 R.R.T Walkthrough‎‎." We, or at least are trying to, do a large Walkthrough project. The only issue here is that we haven't started on making any walkthroughs yet, due to the absence of the project leader. In my opinion, if you really want to make your walkthrough, you should at least take notes or keep track of any walkthrough information off-wiki (on a computer, notebook, et cetera). Eventually, when we start up the walkthrough project again, you should ask if you can join in on the project for the Pokemon Mystery Dungeon Red Rescue Team walkthrough. : ) I would say ask the project leader, Jazzi for any questions, but she's seemingly in an absence for a while, so I'd address any issues or concerns to Crimson. — Wattz2000 21:10, May 15, 2012 (UTC)

Retrieved from "https://pokemon.fandom.com/wiki/User_talk:Vulpixisawesome1424?oldid=500880"
Community content is available under CC-BY-SA unless otherwise noted.