Please make sure to find another source. The one you use is not official, and sometimes has mistakes. Energy X 18:52, November 2, 2017 (UTC)

I saw your summary and the differences between the male/female are at some point a female pokemon like Ash's Snivy for example will kinda look all serious and sometimes push it's trainer like Ash into going to find Iris while waiting for him to return.

Female pokemon like James Mareanie will have a love interest to her trainer she'll daydream about James and her getting married but yeah that is to show how strong there bonds are with there pokemon. Same to Ash's and so on alright anyway yeah.

Glad Ash temporarily had James's Mareanie in that episode and if you want to know Ash's pokemon's latest count  it's 314 outta 319 alright reasons alot has happened and i know many'll state Ash'll have 310 but really with all the latest 1,010 episodes total you gotta think back to episode 10 i guess and now 1,000 episodes later yeah you can see and be amazed at the many pokemon Ash's had what'll be next well that'll appear when it does alright anyway.Trainer Micah (talk) 12:00, January 19, 2018 (UTC)

A gender is confirmed when they have a gender difference (one that has actually been demonstrated in the show prior to that, as older Pokémon might not have their designs updated as seen with Tierno's Raichu for example). It may also be confirmed with Attract or Cute Charm if one of the Pokémon have a confirmed gender, as it only affects the opposite gender. It is not just confirmed when they are shown to have a stereotypical gender trait such as having a random crush on another Pokémon. PokémonGamer* 20:22, January 19, 2018 (UTC)

Mind that the JP names here are different, and shouldn't be named. At least you can propose changes by discussing on an article's talk page. Energy X 10:38, February 3, 2018 (UTC)

When you post a content from the episode that has not been released yet, use {{Future Content}} template. Else it is considered as speculation, which can warrant a block. Energy X 16:07, June 28, 2018 (UTC)

Hey, I wanted to let you know that your edit on the page Ash's Oshawott was rollbacked as it was badly written.Silent Songbird (talk) 18:25, July 15, 2018 (UTC)

Mind that some of your recent edits have been reverted. Just stating that you should find something else to work on, like reviewing grammar or adding links to pages. Energy X 20:03, August 4, 2018 (UTC)

Unsho's successor is Kenyu Horoiushi he'll be taking the roles of late Unsho Ishizuka's roles as pokemon and so on it's unannounced if Kenyu will be doing narration or if just going to do he's done so far counting the pokemon Unsho's done.

Also, the timeslot is one hour earlier so everything will air at 6 PM evening on Sundays rather than 6:55 PM at night on Thursdays. I haven't checked as for TV Tokyo's affiliates outside the region, that's generally posted on the official pokemon.co.jp website. PokémonGamer* 15:27, September 5, 2018 (UTC)

Mind that the biography is written in the past, not present tense. You could've known that if you have read the rest of the biography. Energy X 22:10, September 14, 2018 (UTC)

The magazine in question only gave air dates without much information either - we need a title for a page to exist for that episode.
(About the Pumpkaboo/Gourgeist thing, sorry: I was being dumb and mixing up their English names, I'm not used to the English names and I watch the original series where the original names are the ones I come across, so when it comes to posting stuff on the wiki that I read or translate, it's all a matter of converting them to English to comply with standards here and that requires me to Google Pokémon names or hope that my memory of English names is good enough to be able to convert them to English right away, which in many cases it is not.) PokémonGamer* 08:10, October 29, 2018 (UTC)

About SM097, I’m not the one who created that page in the first place, but someone without proper informations. If you have a problem w/ Japanese & English translation, how bout a translator/texting app (currently for Android) called “takeboko”?. - ScottKazama, 15:25, October 29, 2018.

I was just reminding you since you're the one who created the SM098 page.
And no, I don't use machine translation and Bakecha being Pumpkaboo in English and Pumpjin being Gourgeist in English wasn't a matter of translation (though some users, such as Energy X, don't care about the strict definition of the word "translation" and improperly term this as such), it's a matter of watching the Japanese show which uses the Japanese names and then changing them to English names when posting them on the page (which have nothing to do with the Japanese names). I was mixing up the English names Pumpkaboo and Gourgeist because the former has the "Pump-[kin]" prefix just as "Pumpjin" does.
It's not a problem I have with it, it was just a mistake I initially made that I could have easily avoided.
PokémonGamer* 08:22, October 29, 2018 (UTC)

On Poipole & Silvally’ case however somehow wears those of males automatically, in term of figures and personalities alike, despite being genderless. - ScottKazama 08:37, November 9, 2018 (UTC)

I didn't see Popplio with a ribbon, this is why I reverted that it's a girl. Please can you take a screenshot of Popplio witg a ribbon? LPCDDude (talk) 01:20, December 1, 2018 (UTC)

I have been told by Lordranged7 that you should be able to vote on the User Rights page in order to get a higher rank. If you feel as if you want to do so, go here and leave a user rights request. TheWikiOddish (talk) 22:06, January 23, 2019 (UTC)

What I exactly meant was that you should vote on Oddish's request to either support or oppose his request.--Lordranged7 (talk) 22:14, January 23, 2019 (UTC)

I think so sense like Misty's Togetic - released and Ash's Goodra - called upon and Ash's Solgaleo - befriended i think so sense she's taking care of the pokemon as i said in my blog. I think so yeah shouldn't it i wonder myself? Anyway only processed if someone says so to change it okay?

Don't want you to get into trouble alright so you know anyway in saying til it transforms to sky form so maybe be my in questioning. I'd ask just to make sure...Trainer Micah (talk) 13:44, February 13, 2019 (UTC)

I don’t think I can. Aside I’m pretty busy with my new job job, I have yet to look into those two’s presonalities. Something about secret test behind their mischievous traits, which is the last thing I remember about them for short. ScottKazama (talk) 08:00 February 21, 2019 (UTC)

Probably because you have the settings configured wrong, you just have to uncheck it in Special:Preferences. Energy X 11:50, April 7, 2019 (UTC)

Don't add the 106 ep ref to Mohn's page. It is because that guy did not appear in any form in that episode (and its events were mentioned in ep 116). This is all to avoid certain scenarios where a character is mentioned but played no significant role to be mentioned. Energy X 07:17, April 16, 2019 (UTC)

This is the last time I will point this out. Write biographies in past, not present tense. Do you even read the previous text to know how to write additional entries? Energy X 19:35, April 21, 2019 (UTC)

This is the section for changing your editing preferences. Under Editing Experience you need to uncheck Prompt me when entering a blank edit summary. It should let you save without a summary then. Jazzcookie (talk) 11:37, April 22, 2019 (UTC)

You have been blocked for a day. While this is a minor issue, it still shows you do not listen. I have told many times to write biography in past tense, not present, to line it up with the rest of the text. Either do that like being told, or simply do something else. Energy X 22:32, April 28, 2019 (UTC)

There, is it so hard to write in past tense? Also, it seems you don't even check your talk page at all, else you'd have read the message about those edit summaries, and how to uncheck them. Energy X 22:35, April 28, 2019 (UTC)

It's not necessarily messed up because the only thing the user did was changing the style of the template. It might be a phone thing (I'm currently on phone as well) since I can somehow see the stuff when using the preview button. I'm not sure if they're present when viewing the Pokémon pages on a pc.--Lordranged7 (talk) 16:47, May 27, 2019 (UTC)

Ah okay, seems like it doesn't appear on pc as well. Think it's missing some stuff in the code or something to make it appear because I can see it kinda when using the preview button. I'm not really good with coding regarding templates, so what you can do is contact Fishtank about it and say what's missing and such. Maybe they can fix it since they were the ones who made the change.--Lordranged7 (talk) 18:24, May 27, 2019 (UTC)

I talked to Lordranged7, he and the rest of users aside myself had a same issue as I am. Turns out Desktop/Laptop still OK, but on the full site of tablet & mobile however, did not show gender ratio nor weight. Example from Meganium. 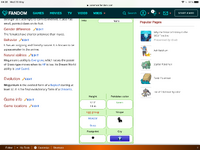 If you want other users see your reply faster, you should leave a message on their talk page instead of replying on your own talk page. Users might miss it and I'm a she btw.--Lordranged7 (talk) 22:41, May 28, 2019 (UTC)

I don't want to sound offensive, but you are now even writing false info. Hau never said that he passed all Grand Trials, and even Hala mentioned that he just started the Island Challenge. Don't make me see more of these "incidents". In fact, it sounds more like you should be focusing on simpler things. Energy X 21:38, July 1, 2019 (UTC)

Odd indeed, is this recent? You could try clearing your browser history, or if that is not good enough, to change to a different browser. Finally, if nothing works, ask the Staff about that. Energy X 14:16, July 20, 2019 (UTC)

Oh wait, there's one more thing. You could create a page titled "User:ScottKazama/common.css" and add the line:

I've found more users having that problem. It may just be that you are using desktop view on mobile phone, so the image is quite large. At any rate, the bug has been reported to the Staff. Energy X 13:23, July 21, 2019 (UTC)

I believe you could have known that you shouldn't change Ash's Meltan article yet because the Pokemon has not evolved yet and the episode has not been released. Please refrain from making such edits until the episode is shown. We don't want to mislead people that the episode has been shown. Energy X 06:15, September 6, 2019 (UTC)

So why did you do this? We have already stated many times that we do not include the biography of plots of episodes that are yet to be released, all because it is speculative content and has not been officially released. Energy X 22:22, September 21, 2019 (UTC)

I guess you haven't seen other articles so far. That post-credits scene is only written for episode plots, but not for biographies, because most of the time it's just silly stuff that has little place to be included in biographies. This is the principle that has been applied. Energy X 14:01, September 22, 2019 (UTC)

Because you have failed to understand that we do not insert information of episodes that have yet to be revealed (hint: SM141), for it makes the user think it is a leak (or at least that the episode has been aired prematurely), you have been banned for a month. I have no more reason for your lunatics. 17:50, September 24, 2019 (UTC)

Why would we do that? The characters appear in a side-series, and they aren't game characters. Same thing applies for other series, like Generations. Energy X 09:07, August 10, 2020 (UTC)