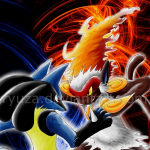 Your right I shouldn't of deleted the page, so I will undo my edit, plus rename the page ecosystem trio because it is commonly refered to that more than the current name of the page. Ellis99 11:13, May 21, 2014 (UTC)

I have explained the reason why it is called Yggdrasil Trio but I have no problem with Ecosystem Trio either.--Monfernape_If any problem? 11:56, May 21, 2014 (UTC)

Would you like to become a member of PokéPower, where we can work as a team? Basically, it is an organization (which has not seen much use in some time), so we could always seek new members (Like you!). Your contributions have been recognized, so if you want to become one, just confirm on my talk page. Energy X 00:15, June 14, 2014 (UTC)

I kinnda forgot about it, but when I remembered about it, I watched whom I could recommend. The vote will be posted once all users I gave invitations have responded back. Energy X 11:50, June 14, 2014 (UTC)

I didn't know that.

Well, since you are a member of Pokepower, go ahead.
Also, you could do this (adding the name, fixing links and changing to "Episode Plot" headline. You can start on Diamond and Pearl Series. Energy X 15:34, June 25, 2014 (UTC)

Damn. Why didn't you saw the examples? You should've used {{nihongo}} template, plus there needs to be a point at the end of the sentence. Lastly, we don't use the translated English names, which can be found here for that season. In short, this. Energy X 19:37, June 28, 2014 (UTC)

If you want to, you can participate in the merge of Pokemon Mystery Dungeon Wiki. Since you know how to categorise images, I would give you some further instructions if you want to participate. Energy X 14:36, July 1, 2014 (UTC)

Okay, it seems the merge was quite quickly done. Anyway, your job will be to go to that site and copy any image locations, but only location images. During the upload, write "[[Category:Mystery Dunegon <?> location images]]", where <?> is the game in which the location appeared. Energy X 11:00, July 2, 2014 (UTC)

Well, I cannot say what causes them to be like that. It seems that it requires an image, which is not present. Odd. I think I should add that, while you'll have to focus on locations. Just search the location images and copy the images. It would be wise to write the whole category, without any shortened names. Energy X 12:37, July 2, 2014 (UTC)

Before uploading images, it is wise to check the existing ones. Some images you uploaded were already present in the gallery. Energy X 12:01, July 6, 2014 (UTC)

Good work. Well, in future, once the new XY episodes start, it is best if you could get the images for those episodes as soon as possible. Until then, you could do the BW series. Considering the popularity of the last episodes, it may be the best if you could start from the end; BW144. It is your choice, though. But I ask you not to add Pokémon: Advanced images, since I'll have to "revisit" them once more.. Energy X 12:13, July 6, 2014 (UTC)

Hey, are you certain you cannot upload bigger images?

Well, all right. Oh, and make sure that they have some originality; there are quite many Team Rocket introduction scenes, all which seem the same. Energy X 21:35, September 13, 2014 (UTC)

Please upload XY039 episode images once more. I think you did something wrong and uploaded the wrong pictures. Energy X 19:02, September 15, 2014 (UTC)

Er, wait, are you planning on uploading images for Advanced Generation series? If so, don't do the Advanced season, as I am going to upload pictures later.

Er, not exactly. Some episode articles after AG080 (including that one) have the image in the infobox that is too small. I am asking to upload a new, bigger image and replace those ones. Energy X 19:20, September 15, 2014 (UTC)

Because they said we could though me emailing them and by saying in the summary section on uploading an image, "credit given to Serebii". Ellis99 CODE XANA 20:14, September 18, 2014 (UTC)

Do it through upload multiple photos, it's quicker and you can give them all the same category too by putting the category in the summary section on it. Ellis99 CODE XANA 20:23, September 18, 2014 (UTC)

Could you tell me why you rename the characters from Mystery Dungeon games to have "Mystery Dungeon" instead of the original, which was "character". Ellis99 CODE XANA 12:30, September 20, 2014 (UTC)

Ok Monfernape I know we don't know each other very well, but I know you're good user. I don't wish to fight you. I don't get the image box thing, but for once trust me on this. Boxes on the main pokemon articles aren't really necessary. Not just for me, but for others users it's better if there outward (see all the pictures at once). Besides the pages aren't really that long. I work hard making and adding those.--Kyurem147 (talk) 19:58, September 21, 2014 (UTC)

Uh, that is not where you are supposed to make the request for any projects; it is only for rollback/chat mod/admin/bureaucrat requests. Energy X 15:25, September 22, 2014 (UTC)

Oh, I don't know about that. In my opinion, you get the award during your editing here. However, I might make a new template that may be considered as award for (current) editing. Energy X 09:33, September 25, 2014 (UTC)

Thanks for your really kind message about my edits on the manga section, it really made my day! I will make sure to keep up the edits! I didn't like the manga at first to be honest but after starting to edit the manga, I began to love it. Also, thanks for congratulating me for becoming a FU!--Lordranged7 (talk) 17:29, January 4, 2015 (UTC)

Retrieved from "https://pokemon.fandom.com/wiki/User_talk:Monfernape?oldid=1001032"
Community content is available under CC-BY-SA unless otherwise noted.