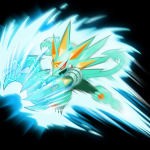 Look, I know you've told me to stop doing this but I keep adding those categories because I somehow thought it was a good idea to describe the name of the move in the images. So, I didn't see any point of me refraining myself from doing so. I'm not trying to be a troublemaker, I just want to make it a bit easier for everyone on the wikia. DragonSpore18 (talk) 01:22 November 9, 2016 (UTC)

I'm sorry to inform you that I am leaving the wiki. I've more than my fair share of work so I'm leaving with the fact that I helped the wiki a good amount. Because of my leave if abscence, I am no longer going to need to be a Content Moderator. Thank you. And it was a pleasure to work witg you. --Rai 水 (talk) 19:30, November 11, 2016 (UTC)

What's the policy on spoilers here when it comes to editing pages? Is it just put whatever you can and assume readers are reading at their own risk, or is only specific stuff allowed. 'Cause I see stuff like Solgaleo Lunala prevo being casually mentioned on the page for SM but I haven't seen much in the way of any other plot spoilers. PKMNthehedgehog2.5 (talk) 22:07, November 11, 2016 (UTC)

Alright then, I was mostly asking to see what I should and shouldn't do in regards to editing. Lots of info and evolution methods and characters and whatnot. I won't put any spoiler information that's huge for the plot or in articles that are from pre-gen VII games, but I'll try to put some info in articles directly related to gen VII. PKMNthehedgehog2.5 (talk) 22:19, November 11, 2016 (UTC)

The whole game's leaked by now, but I won't post anything plot related until post release. Right now I'll just do stuff such as what level a pokemon evolves and small stuff like that, since people would probably want to know that before getting into the game anyways. PKMNthehedgehog2.5 (talk) 22:24, November 11, 2016 (UTC)

There are new segments for each of the episodes of Sun and Moon's anime to replace Pokémon Quiz. I am going to wait however to see what they're called to add them, or at least wait until they appear on Hulu Japan, since the audio on my source where I watch TV Tokyo is not clear and the audio is incorrect to the point where you cannot understand what the characters are saying no matter how much knowledge of Japanese you have. If the audio was correct and clear, I'd be able to listen to what the segment was named and translate it and list it in the trivia section. Until I figure out the name of the segment, here's what the Pokémon (in Japanese) appearing in the segments are:

The segment has no official name. The series has just arrived to Hulu and I listened to what it says during the segment in Japanese, when it shows the Pokémon silhouette on the 4 pieces, it says ポケットモンスタ (Pocket Monsters), and then after the advertisement when it reveals the Pokemon, it says ポケモンゲットだぜ！ (Catch Pokémon!). The segment of this series goes like this: it shows four pieces of the Pokemon's shape in its silhouette form and you have to guess which Pokemon it is. After the advertisement break, it reveals what the Pokemon is. So my question is, what should we list it as? Should we list it as "Who's that Pokémon? (JP): [Pokémon]" since there's no official Japanese name? PokémonGamer* 11:38, November 17, 2016 (UTC)

As I was going to get the preview image for SM003, I noticed something new: the previews have added the text read as "次回予告" ("じかい よこく") at the top right of the screen to match with all the other TV Tokyo anime, so when we go to get the preview images, we now have an extra hurdle: we have to edit out that text before we go to upload it. PokémonGamer* 11:55, November 17, 2016 (UTC)

I wasn't accusing you of loading from bulbapedia, it just bulb had the same image so I thought make it not so similar. Same thing happened to me once. Sorry about the misunderstanding.--Kyurem147 (talk) 04:33, November 18, 2016 (UTC)

okay in that case i wanna begin tomorrow for swicht names for his number of pokedex the first and the last pokemon for eixample 723 (Rowlett) to 802 (Marshadow) ¿is you want to try to explain me?—Preceding unsigned comment added by Borjitasstoi (talk • contribs)

Aren't you the least concern about the new series style? User:Rystrouse renewed

Title, really. But first, to introduce myself, the name's Jade, and while I'm mainly active on fanon wikis (including PokeFanon), I come around to the canon ones a lot to look up stuff for my creations.

As to the etymology... I believe Decidueye may come from "deciduous", a type of forest, while "eye" may refer to the term "dead-eye" or "bullseye". We know Rowlet is based off the owl, and owls live in forests - often ones that lose their leaves seasonally (deciduous also refers to trees/plants that do). And Decidueye's Z-move art shows it with an arrow up to it's wing.

I understand if you don't want to add this without confirmation, I'm just stating it's a possibility and could be taken into consideration.

Thanks! I'll do that now.

in this wiki allows put QR codes for pokedex entries from pokemon sun and moon? maybe this question its answered in faqs or policy this wiki rules but first all ¿its correct upload this material?

Admins can't remove the Content/Discussion Moderator right, it has to be done by someone who has admin and bureaucratic rights. Slay(Talk)(wiki)(website)(discord server) 11:25, November 22, 2016 (UTC)

Retrieved from "https://pokemon.fandom.com/wiki/User_talk:Lordranged7?oldid=926322"
Community content is available under CC-BY-SA unless otherwise noted.