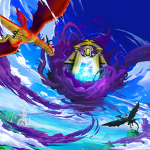 Yes, in a sense, you could say that.

Do I get appreciation for my work, because my motivation for this wiki is lost for a very long time. KidProdigy (Local Userpage ⁝ Local Talk) 14:44, October 11, 2014 (UTC)

I thought about it and... thanks for your offer, but I have simply no interest in this wiki anymore. KidProdigy (Local Userpage ⁝ Local Talk) 11:10, October 12, 2014 (UTC)

Once again, you decided to leave a bunch of messages on people's talk pages, despite a) you already did this before and it didn't help, and b) it's really none of your concern. --Shockstorm (talk) 18:25, October 11, 2014 (UTC)

Because it's not only not working, as you can see by the responses you've gotten, and you have no business spamming people's talk pages with your poorly-written nonsense. You really need to get a clue. --Shockstorm (talk) 22:19, October 11, 2014 (UTC)
Ok, this is your final warning. Today I've already had to rollback multiple edits from you, and even protect a page due to your edit-warring. You do not get to go around harassing people about their editing habits and real life responsibilities, particularly since many of them aren't even active, and don't appreciate being bothered. Continue to waste people's time and disregard admins, and you will be blocked. --Shockstorm (talk) 07:14, October 12, 2014 (UTC)

Well, Shock seems to have a disagreement with your edits. It is best not to pry further, which is why it is best to stick with the jobs we might have for you. Anyway, I guess you could continue updating the anime pages (DP Series) with the names, or you could assist us with the image names. Energy X 07:49, October 13, 2014 (UTC)

I have seen the new Mega Evolutions of Glalie and Steelix and they looks cool! It's great to see that more of Ash's Pokémon got their Mega Evolutions (and Brock's too)! I think it's not a bad idea to see a Mega Butterfree, a Mega Beautifly and a Mega Dustox! Those choices are good too! Nectaria

It seems that Hoopa will be the star of the second XY movie (maybe because of its mega evolution?) but we shouldn't created a page for it untill it became a revealed pokémon! Nectaria

Well, we lack content, though that is something we all want to change. However, it is not just that, but the history of this Wiki itself. I've seen many users that copied info or images from Bulb, decreasing our influence. Energy X 08:48, October 17, 2014 (UTC)

Don't constantly ask other people to undo changes I've made, especially when you leave out important details (ie, making it sound like I deleted someone's only signature, when in fact it was their second one). If you have a problem with something I've done, then talk to me. I'm not going to allow you to lie or make false accusations towards myself or any others. If you try going around people and lying about them behind their back, it's just going to end up hurting yourself. --Shockstorm (talk) 23:21, October 17, 2014 (UTC)

Thanks for the info, I created the page. I will add pictures to it later.

No time, man. I feel I'm best suited to rollback work anyways and it would take a lot of effort to get there. —Preceding unsigned comment added by Latiasfan001 (talk • contribs)

Why are still sending messages to the users here 0_0? I thought you leave on Pokémon Wiki because you're still upset with Shockstorm :(. I wish you should change your mind and come back on this wiki and on Pokémon Answers Wikia :(. *almost cries* Please :(!  Nectaria

There we go. Are these okay?

P.D.: Sorry for not replying before.

A proposal to redesign the wiki is on the table. Please drop by w:c:czechitout to take a look at the new design, then return to the forum thread to give your views. Thanks :) — CzechOut 03:53, October 24, 2014 (UTC)

Ellis, so you came back to edit your user page only? I will be very happy if you decided to edit pages on this wiki again. Sigh, please :(.  Nectaria

Oh, Ellis :(. *starts crying of joy* Welcome back :') *wiping a few tears*. It seems that you changed your mind and you made me so happy ^_^. OK, It's better to not make more mistakes. Thanks for your reply ^_^.  Nectaria

Thanks for posting the link! I'm still upset with Gamefreak because they didn't change Phoebe's and Drake's designs. They don't looks different from their original designs -_-. Nectaria

Hmm...OK, that's your opinion about it! Huh, do you think those images should have been deleted? Please tell me what are you talking about 0_0? Nectaria

X told a long while back that user could have pics that aren't Pokémon-related on their user page and Shock deleted them, they were on Kirbyna something's user page. Mewtwo is going to return on SSb for the Wii U next year. Ellis99 CODE XANA 16:44, October 24, 2014 (UTC)

Ah, I see but I don't think any non-Pokémon related pictures are allowed to this wiki but it's fine to post pictures from Super Smash Bros series because this series have some Pokémon characters in it! Huh, Mewtwo is going to return in the new SSB games? Where did you hear that from? Just wondering! Nectaria

I think PokePower needs to be revived so there won't be mis-communication and it's on Serebii, one of the best sources in the world. Ellis99 CODE XANA 16:57, October 24, 2014 (UTC)

Your not upset with me bringing up THAT situation up again? I just wanted to prove that I wasn't lying. I'm not going to talk about it anymore since I want it to be in the past. Ellis99 CODE XANA 16:58, October 24, 2014 (UTC)

I agree that PokePower should have been revived! Well, I checked it on Serebii and I didn't find any informations about Mewtwo returning 0_0. Huh, what are you talking about? Why you don't want to talk about it? Just wondering! Nectaria

I just don't want there to be another argument then a possible infinite block if he see what I might put plus I would like to put it in the past. I'm going to create a blog on the revival. Ellis99 CODE XANA 17:08, October 24, 2014 (UTC)

OK, I see! So, you don't want to be blocked by Shockstorm again! Go to create this blog if you want to! Thanks for answering me. Nectaria

Well, I checked the new blog before you send this message! Thanks for replying me again ^_^. Nectaria

OK, there is no reason to worry about it :). Thanks for your reply! Nectaria

Well, I have read your message before I send my message on Energy's talk page! It was me who reverted Samreen5's edits not you! Nectaria

I know that! OK, thanks for answering me! Nectaria

... *Facepalm* No, I'm not silly -_-. I know that you didn't reverted Samreen5's edits! I told you that it was me who reverted her edits. OK, thanks for answering me again. Nectaria

Why, a disagreement shouldn't bar your way (unless it is a block). Just mind to focus on newer tasks, for your page formatting has removed some content and earned you blocks. Energy X 21:13, November 4, 2014 (UTC)

Ellis, if you want to do the news blog, that's fine. In fact, I would encourage it since I've been busy with school and other stuff, and I'm just not able to cover the news as well as you've been able to. --Shockstorm (talk) 02:53, November 5, 2014 (UTC)

Yes, that's fine. You probably won't have to deal with me anymore, as I'm thinking of resigning my position as admin. I've been busy with stuff in real life, and I don't feel like I've been very effective as an admin or editor here. Anyways, good luck in whatever you choose to do. --Shockstorm (talk) 18:23, November 5, 2014 (UTC)

Well, blocked them, except Slug Drones. Does not seem that user belongs to them, plus he/she contributed to this site some time ago. Energy X 17:45, November 6, 2014 (UTC)

I don't think adding sections to the episode appearances is necessary. I would only do that if the character appears in different seasons, but that is it. Energy X 17:48, November 6, 2014 (UTC)

You mean Water type. Well I go in order, so for your bad luck, the Water type is the last alphabetically, so I doubt I can do it right now, since I'm in the Poison type.

Why, we have the Featured Character and Pokémon. Nothing more beyond that, might clutter the page. Energy X 22:16, November 7, 2014 (UTC)

Hey there! I am not really doing different things on the wiki, I know I am supposed to help with the manga, but most of the time, I am on my phone (like now) and then it is hard to add pages. I am also busy with school and due to add I don't have a lot time~ I will continue again when I have time again~ For the time being, I am editing simple but also helpful edits that I am able to do on my phone~

From the movie you mean? I have downloaded the movie and took screenshots of it~

No problem, glad to be able to help.

There are several reasons not to. They include, but not limited to: not enough interest, real life problems, editing on other Wikis, quitted Wikia etc. So yeah, best not to pry too much, they'll come if they have time. Energy X 09:13, November 10, 2014 (UTC)

Well, I don't recall any other demo in any Pokémon game, so no. As for the images, do as you think, though I think they already have their own source for the sprites. Energy X 09:44, November 10, 2014 (UTC)

Well, you could either resize them via some image editing programs or ask Avignon to modify the templates. Your call. Energy X 19:36, November 10, 2014 (UTC)

What do you mean? All the pages have been transferred. I am not going to change any colors until the site colors are changed. ~remaai

I noticed that you uploaded so many images from the games and some images from the second chapter of the Adventures manga. It would be great if you will upload some images from the anime. I think you should upload images from Diamond and Pearl, Best Wishes, Advanced Generation, XY or maybe Special episodes like the Mega Evolution Specials or the DP Special Episodes: Dawn - Setting Off On a New Journey! and Pewter Gym - The Greatest Crisis Ever!. Nectaria

Retrieved from "https://pokemon.fandom.com/wiki/User_talk:Ellis99?oldid=589523"
Community content is available under CC-BY-SA unless otherwise noted.